ADtchi has light blue skin and pink lips. He has round eyes and round ears on the side of his head. He has long, skinny arms and legs. It looks like his legs connect to his head, and he lacks a torso. He wears a backwards white cap on his head and a clock on a rope around his neck. He has red straps on his legs, and one holds a walkie-talkie, and the other holds a white rolled paper. He usually holds signs with messages for the TAMAX-TV crew.

ADtchi is not too certain about some of TamaPtchi's ideas, but obediently follows them anyway. He gets worried and panics easily, but is grateful that Lovelin trusts him. He has a crush on Dazzilitchi. At the end of the day, he energetically tells the crew to look forward to tomorrow.

ADtchi appears in the Tamagotchi! anime. He helps TamaPtchi film movies and commercials.

The "AD" in ADtchi's name may stand for "assistant director". 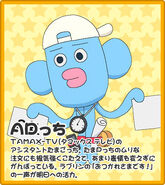 Add a photo to this gallery
Retrieved from "https://tamagotchi.fandom.com/wiki/ADtchi?oldid=88543"
Community content is available under CC-BY-SA unless otherwise noted.