Acchitchi has an orange body, with red and yellow fire-like hair. He has white sweat droplets running down his head. He has red cheeks, and his eyes are usually closed.

Acchitchi can be obtained from any male teen that receives 8 or more care misses, and has Intelligence, Gourmet, and/or Strength personality elements.

Acchitchi evolves from any male teen with poor care (Maimaitchi with 5 or more Care Mistakes, Bokuhoshitchi with four, or Cosmotchi with seven) and trained to have a Gourmet personality. If no specific training is used, there is a 33% chance the teen will become Acchitchi.

Acchitchi debuted as an app-exclusive marriage partner. He was initially available on both the English and Japanese apps throughout August 2019. He will be available to marry a second time in August 2020, but will be exclusive to the English app.

In episode 29, he gives Mametchi and his friends an envelope that he claims to contain a dangerous secret about the Tamagotchi Planet, and begs them to protect it at all costs. However, it is actually his report card, which he was trying to hide from his family.

"Acchi" is a Japanese word that comes from "atsui", and means "hot". This refers to Acchitchi's flame-like appearance. 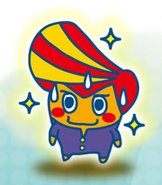 Acchitchi screeching
Add a photo to this gallery
Retrieved from "https://tamagotchi.fandom.com/wiki/Acchitchi?oldid=94694"
Community content is available under CC-BY-SA unless otherwise noted.