Acrobatchi has light yellow skin, blue eyes, and two pink stars on her cheeks. She has a lighter yellow and pink loop on her head, with an orange star in the middle. She wears a hot pink gymnastic bodysuit with blue and pink stripes, a pale pink tutu, and carries a pink gymnastic ribbon.

Acrobatchi works at the Tama Star Circus in Dream Town. She is a very talented acrobat and is known as the big star of the show. Acrobatchi carries her own gymnastic ribbon which she uses to create illusions.

Acrobatchi appears briefly in episode 50 with the other Tama Star Circus members.

Occasionally, Acrobatchi may offer herself as a marriage partner in Tamagotchi Friends Dream Town. This is most likely an unintended easter egg as it also works if the character is female. 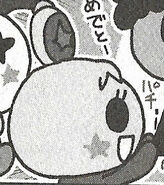 Add a photo to this gallery
Retrieved from "https://tamagotchi.fandom.com/wiki/Acrobatchi?oldid=97193"
Community content is available under CC-BY-SA unless otherwise noted.