Akaspetchi (アカスペっち Akasupetchi) also known as Akaspacetchi in the English version of Tamagotchi!, is a male adult Tamagotchi. He is part of the Spacy Brothers, and he is younger than Spaceytchi and older than Pipospetchi. Akaspetchi debuted in the Tamagotchi! anime. On the virtual pets, he debuted on the Tamagotchi iD L Princess Spacy version.

Akaspetchi's appearance is very similar to Spaceytchi, who resembles a anglerfish. Akaspetchi is smaller, and he has a red, tear-shaped body. He has oval-shaped blue eyes with no visible pupils. He has a yellow beak, and he cannot close or open his mouth properly when he talks; his four teeth are always visible. His legs are white, and his arms are light gray with mitten-like hands. He has a tiny, gold sphere on the top of his head.

Akaspetchi is the smart and mature brother. He is sometimes seen as friendly and nice, but is as evil as his big brother Spaceytchi. However, he gets afraid easily and starts panicking. Spacytchi usually ignores him at first, but soon everyone gets nervous because Akaspetchi makes up frightening explanations for things. He believes in ghosts and aliens because he thinks TV shows are real, which is the reason he panics easily.

When talking to his big brother Spaceytchi, Akaspetchi always gets confused or speaks his own mind which ends up making his big brother mad; Spaceytchi then starts shouting at him to understand or to stop talking.

In the Japanese version of Tamagotchi!, Akaspetchi often says de yansu (〜でヤンス) at the ends of his sentences, which is a onomatopoeia word, similar to Pipospetchi's "pipopapo" (ピポパポ). He also calls Spaceytchi "Aniki", which is a Japanese honorific for an older brother. Spaceytchi often calls him "Aka", for short.

Akaspetchi is obtained from Happabouyatchi with 6+ care mistakes. He is the worst care character in this version. 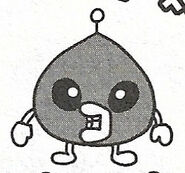 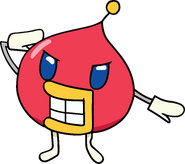 Akaspetchi in a Crabs Costume

Add a photo to this gallery
Retrieved from "https://tamagotchi.fandom.com/wiki/Akaspetchi?oldid=100824"
Community content is available under CC-BY-SA unless otherwise noted.