Amakutchi (あまくっち Amakutchi) is a female adult Tamagotchi character that debuted in the anime Tamagotchi! Yume Kira Dream. She was released as a raisable character on the Tamagotchi P's.

Amakutchi has a pink oval-shaped body. Her head appears to have three layers of frosting with sprinkles and a yellow bow on top. She has big round eyes, which have brown irises in the anime, and pale pink cheeks.

Amakutchi's older brother, which she calls onii-chan (お兄ちゃん), is Karakutchi. They have many arguments about each others' cooking (especially Karakutchi, who always starts them), and sometimes others' cooking beside themselves, such as Kuchipatchi's.

Amakutchi is obtained by giving any girl teen 8 or more care misses.

Amakutchi is obtained by having any female teen win the Chef class minigame at Dream School at least three times, and by taking generally bad care of her through achieving a significant amount of care misses.

Amakutchi is in the cooking class at Dream School. 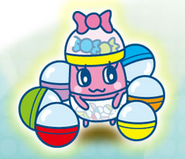 Add a photo to this gallery
Retrieved from "https://tamagotchi.fandom.com/wiki/Amakutchi?oldid=93645"
Community content is available under CC-BY-SA unless otherwise noted.