Amiamitchi has a pink face and small, round eyes. In the anime, she has dark pink irises. Her hair resembles balls of yarn, and there is a sewing needle in her hair with a pink ribbon tied on it. She wears a light red dress with white stitching along the bottom. Her stockings are brown, and her arms and body are yellow.

A kind and quiet girl who'll help a friend in a moment's notice (especially if it's with fixing some clothing), Amiamitchi is a budding seamstress who loves anything to do with sewing, be it tailoring or making stuffed animals in her spare time. She owns a Tama Pet named Amipoketchi.

Amiamitchi can evolve from either female teen (Nokobotchi and Neotchi) with 8 or more Care Mistakes and trained with a Style personality.

Amiamitchi is a guest character that appears when visiting the park.

In Tamagotchi! Yume Kira Dream, Amiamitchi is in the sewing class at Dream School, with Spacytchi, Pipospetchi, Akaspetchi, and Hanafuwatchi. Her best friend is Hanafuwatchi. She loves sewing, and her favorite thing to make is stuffed animals.

In Tamagotchi! Miracle Friends, she befriends Clulutchi. She also appears in GO-GO Tamagotchi!.

She is voiced by Kei Shindou, who previously voiced Lovelitchi.

Ami (あみ) is a word usually used for sewing terms such as stitch, knit, crochet, etc. 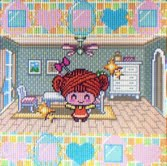 Amiamitchi on the Tamagotchi P's 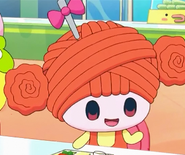 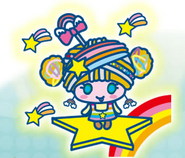 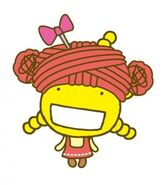 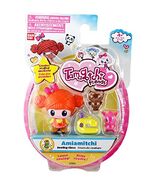 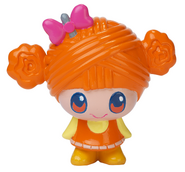 Add a photo to this gallery
Retrieved from "https://tamagotchi.fandom.com/wiki/Amiamitchi?oldid=102338"
Community content is available under CC-BY-SA unless otherwise noted.