Anchitchi (あんちっち) is a male Tamagotchi character who only appeared in episode 124 of the Tamagotchi! anime. He is the leader of a gang of three skateboarders, which also includes Tanchitchi and Ponchitchi. He is voiced by Etsuko Kozakura.

Anchitchi is light blue with a darker blue turtleneck and beanie, as well as blue-gray pants. His clothes cover his hands and feet. His beanie has the letter "A" on it in white, and there is a section of blonde hair coming from his right side. He wears pink glasses with rectangular rims, and he has leering blue eyes.

Anchitchi is a skilled skateboarder at Skate Park in Celebria. He specializes in doing high jumps. He doesn't let anyone else use Skate Park besides his gang, and he criticizes others' skills. He agrees to give up if Kikitchi can beat him in a face-off. When Kikitchi shows him kindness even after winning against him, Anchitchi decides to let go of their rivalry.

Anchitchi usually maintains a confident and cool attitude, and lets his companions do most of the talking. He uses a lot of honorifics in his speech. He also is a customer of Waru Cafe, where he will typically order shots of espresso and intimidate Spacytchi.

Anchi is a Japanese team meaning "anti-" which is sometimes used as the slang term, "hater". This fits his antagonistic portrayal throughout most of the episode. His name may also stem from anchan, which is the Japanese equivalent of "sonny" or "young lad". 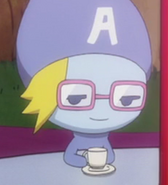 Anchitchi getting along with Kikitchi
Add a photo to this gallery
Retrieved from "https://tamagotchi.fandom.com/wiki/Anchitchi?oldid=86409"
Community content is available under CC-BY-SA unless otherwise noted.