Anemoriritchi resembles a poodle. Her head is colored orange and has long shaggy ears. Her face and body are light yellow. She has blue oval-shaped eyes that have four eyelashes on top and three on the bottom and has pink lips. She wears a light blue vest over a white dress, and she has a pink swirly rose with two leaves on top of her head. When she is very happy, more roses will appear all over her head and body.

Anemoriritchi's personality is similar to her little sister, Moriritchi. Anemoriritchi is charismatic and very skillful with Tamamori. She seems a bit more calm and more responsible than Moriritchi. Her best friend is Agetchi.

Unlike Moriritchi who loves her camera Pashalin, Anemoriritchi doesn't. According to her, Pashalin has old photos in her memory bank from 8-10 years ago that show Anemorirtchi in "embarrassing" outfits. Anemoriritchi tries many times to kidnap Pashalin to erase the photos, but she never is able to. Moriritchi is unaware of this.

Anemoriritchi appears at the Tama Fashion store in the TamaDepa.

Anemoriritchi appears as a minor character. She is Moriritchi's older sister and they both run the Tamamori Shop. She is voiced by Rei Shimoda. 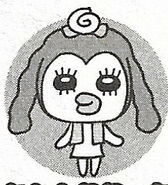 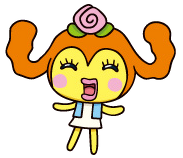 Add a photo to this gallery
Retrieved from "https://tamagotchi.fandom.com/wiki/Anemoriritchi?oldid=90200"
Community content is available under CC-BY-SA unless otherwise noted.