Anesantchi is based on a geisha. She is white with orange eyeliner and red lipstick. She has black hair done up with golden hair accessories. She wears a red and purple outfit with a yellow ribbon on it.

A Tamagotchi that loves excitement and attending banquets. It frequently spends time at parties and loves to sing. It practices the traditional performing arts.

Anesantchi appears as a background character in some scenes.

Anesan is a respectful way of addresing a young lady.

Anesantchi and Zukyutchi happy, from Tamagotchi: Happiest Story in the Universe! 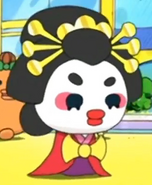 Anesantchi in the Tamagotchi! anime

Add a photo to this gallery
Retrieved from "https://tamagotchi.fandom.com/wiki/Anesantchi?oldid=91208"
Community content is available under CC-BY-SA unless otherwise noted.