A total of 27 episodes were aired on TV, although only episodes 1-9 were released on the VHS, "Video de Hakken!! Tamagotchi", leading to the remaining 18 episodes becoming lost aside from episode titles.

The series is about the adventures of Tamagotchis taking place entirely on Tamagotchi planet. It features the classic Tamagotchi characters, most episodes following a format of focusing on a specific Tamagotchi in an episodic form. The art style has a slight line boil effect to it in some episodes. The dialogue is mostly just portrayed through noises the Tamagotchis make and facial expressions, there being no real dialogue except for a few scattered words. Each episode only runs for around 1 minute or so, some being shorter or longer.

In this episode, it shows the growth of Tamagotchis on the P1. They start as hungry Babytchi, and then become Marutchi after being fed. As Marutchi, they make poo, and a duck cleans it up. (The duck was the original icon for cleaning up poo.) They evolve once again into the 2 teen characters, Tamatchi and Kuchitamatchi. The Tamagotchis start to fight, but they are disciplined, and they stop. Then they evolve into the many different adult forms. After this, Maskutchi starts to feel weird, and becomes Oyajitchi, who scares everyone away.

In this episode, Ginjirotchi, Tarakotchi, and Kuchipatchi are reading a book, and are enjoying it. Maskutchi sneaks up on them and tries to read it, which scares them. This happens a few times, until Ginjirotchi tries to give Maskutchi the book so he can read it himself. However, Maskutchi refuses, and runs away. Later, while Kuchipatchi, Ginjirotchi, and Tarakotchi are eating lunch, they hear Maskutchi laughing. He is reading the book, and they laugh along with him.

In this episode, Ginjirotchi and Mametchi are eating at a restaurant. Mametchi thanks the Kuchipatchi who served them their food, but afterwards, the food is gone. Mametchi tries to figure it out, and peeks at his plate while thanking the waiter. He finds that Nyorotchi is eating the food when he isn't looking. When the dessert comes, Mametchi moves his food away, and Nyorotchi comes after it. Nyorotchi chases Mametchi until he finally gets the food. He then gets sick, and 2 doctors come to help: Tarakotchi and Maskutchi. Tarakotchi gives Nyorotchi a shot, which makes him feel better. Then all the Tamagotchis sit and eat together.

In this episode, Mametchi is controlling traffic. He tries to help a Tamagotchi back up, but then he backs into another car. Then Mametchi tries to get a Tamagotchi to move forward, an a similar thing happens. Later, lots of Tamagotchis are stuck in traffic, because Mametchi is not doing his job, and instead he's eating rice in the middle of the road. He gets back to his job, but traffic starts moving faster, and Mametchi gets tired. At night, the Tamagotchis are stuck in traffic again, because Mametchi is sleeping in a bed on the road.

This episode begins with Ginjirotchi happily walking through a field, stopping to spin in the air. A few Tamagotchis come over to cheer him on as he continues to spin, however he starts to get dizzy or possibly overwhelmed when more Tamagotchis appear and he continues to spin. More of a crowd gathers as Ginjirotchi tries to continue spinning, his vision eventually blurring as he slowly spins to the ground, the group of Tamagotchis leaving after that.

This episode begins with Kusatchi and Zuccitchi bouncing a ball between each other, stopping when they notice Pochitchi walking by. Kusatchi then begins teasing Pochitchi, whistling towards him like a dog which Pochitchi quickly gets angry at. Pochitchi after that does a few dog-like things, which he quickly to snaps himself out of doing. Kusatchi and Zuccitchi nod to each other and Kusatchi whistles towards Pochitchi again, succeeding in calling him over this time. Kusatchi then throws a bone for Pochitchi to fetch which he quickly does, embarrassed by it after realizing. Zuccitchi starts instructing Pochitchi to do dog tricks which he also does excited, quickly becoming embarrassed again and running off to hide in a dog house and cries. It's then shown later Pochitchi happily howling at the moon, once again becoming embarrassed though.

This episode begins with Zuccitchi running as he looks side to side and hides behind a tree before hopping into a bush, removing his cowl beyond view as he takes a shower. Mimitchi, Takotchi and Hashizoutchi look over from behind a tree as the three wonder what Zuccitchi really looks like under his cowl. Zuccitchi puts his cowl back on as Mimitchi attempts to remove Zuccitchis cowl from behind, him quickly reacting before she is able to and getting angry the second time. Takotchi then tries, Zuccitchi unknowingly dodging because of picking up an egg from the ground. Hashizoutchi and Mimitchi then try using a claw to grab the cowl, which they succeed but find out there's another underneath. Zuccitchi laughs at the Tamagotchis attempts, as the three Tamagotchis begin to fight Zuccitchi in a dust cloud, which Zuccitchi manages to get out of and laughs again.

In this episode, Tongaritchi attempts to plant a garden, getting excited after planting and watering the seeds. Multiple Tamagotchis show up and make Tongaritchi gardening much harder, including Nyorotchi eating the seeds out of the ground and Charitchi running through the garden three times. Tongaritchi quickly gets angry after all of this, placing down fences around the garden and a sign with an angry face. Tongaritchi then sees something small in the dirt, thinking it's a plant sprouting, actually turning out to be Mametchi driving a drill which destroys the garden, Tongaritchi getting upset once again.

This episode begins with Ginjirotchi being shown in a Tamagotchi hospital, Mametchi sadly confirming his passing. The Tamagotchis there quickly mourn him as a Obaketchi appears, attempting to talk to the Tamagotchis still. Three Angeltchis appear and guide the Obaketchi up to Tenshitchi capital, becoming Ginjirotchi angel once passing through a gate. Ginjirotchi angel is surprised at first, but smiles and spots some treats which he picks up happily. It's then revealed that it was a trick by Deviltchi but is quickly chased off by Chestnut angel. Ginjirotchi angel is guided over to another area with Angeltchi, enjoying shaved ice as the episode fades out.

The rest of the episodes have not been released on VHS and only their titles are known. 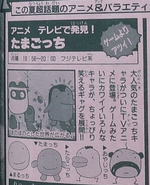 Advertisement in Televi magazine for an unknown episode