Arabian Night is located in the desert oasis with various buildings themed after magical lamps, storybooks, carpets, and turbans.

Arabian Night is a location on the Tamagotchi Meets exclusive to the Fantasy version. It is unlocked from the second generation onward by using the Jewelry Box item, which can be earned by visiting the Princess Palace and using the Prom Night option after 7 PM. A jewel will roll out of the box into the backyard where it'll transform into a flying carpet. The tamagotchi will ride the carpet into a storybook where they'll land in the Arabian Night location.

Exclusive residents can be talked to and played with here. If the residents are the mother or father of the user's tamagotchi they will not appear.

Otogitchi runs the shop here. They sell souvenirs exclusive to Arabian Night and also the standard items and accessories from the Tourcontchi chain stores.

The user controls a turban wearing tamagotchi as they catch jewels falling from the sky while avoiding skulls. They can be moved left (A button) and right (B button). The more gems they catch the faster the gems and skulls will fall. The game ends when the tamagotchi hits a skull or when they collect 15 gems.

The tamagotchi can propose to a resident if they have a ring. 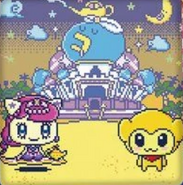 Retrieved from "https://tamagotchi.fandom.com/wiki/Arabian_Night?oldid=100251"
Community content is available under CC-BY-SA unless otherwise noted.