Male:
Atsuatsutchi (あつあつっち Atsuatsutchi) is a male Tamagotchi character that first appeared in Tamagotchi: Happiest Story in the Universe!. He also appears as a background character in the Tamagotchi! anime, as a student in Chamametchi's class.

Atsuatsutchi is light red with chubby cheeks and a tuft of fur on his forehead. There is a red heart on the back of his head, and it makes Atsuatsutchi appear to have two small ears.

Atsuatsutchi is depicted as being very shy in the anime. However, he is a very big fan of Lovelin and gets excited when he has a chance to meet her. He also has a Lovelin doll. He has a crush on Himetchi and sometimes fights with Sabusabutchi to win her heart.

In episode 31 of Tamagotchi!, Atsuatsutchi's mother and sister are seen but their names are unknown. He also keeps a dog-like Tama Pet that he found.

Atsuatsu is a Japanese term that can mean "passionately in love", which may refer to the heart on his head and his love for Himetchi. However, atsu can also mean "hot", which may be derived from the fact that his rival's name, sabu, means "cold".

Atsuatsutchi in Tamagotchi: Happiest Story in the Universe! 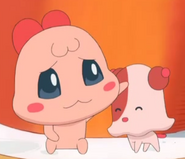 Atsuatsutchi and his Tama Pet 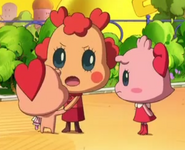 Atsuatsutchi in one of Tamagotchi! opening themes

...in which Atsuatsutchi gets lucky

...and then snickering together

Add a photo to this gallery
Retrieved from "https://tamagotchi.fandom.com/wiki/Atsuatsutchi?oldid=98339"
Community content is available under CC-BY-SA unless otherwise noted.