Bagubagutchi (ばぐばぐっち Bagubagutchi), also known as Barkbarktchi or Bagbagtchi, is the Mame Family's Tama Pet. He appears as a Mame Family member in Tamagotchi Connection Version 5, and is adoptable on Tamagotchi iD L. He also appears on the Tamagotchi School.

Bagubagutchi resembles a dog and a bag. He has a blue body with a square-shaped, bag-like head with papers in it. He has a tag attached to the side of his head. He has a yellow spot on the left side of his face, dark round eyes, and a small round nose.

Bagubagutchi is very smart and can do Mametchi's homework for him. He carries Mametchi's things for him. If someone puts a dog tag on him, he'll follow the person that put the dog tag on everywhere.

Bagubagutchi appears in the feature film, Tamagotchi The Movie, where he is often seen with Mametchi in his laboratory or room.

He also appears in the Tamagotchi! anime series. In one episode, he raced against other Tama Pets and won.

Bagubagutchi is student #074. His favorite subject is drama.

Bagubagutchi appears in Donuts Park from 10am-11:59am. The player can choose to adopt him.

Bagu most likely comes from baggu (バッグ), meaning 'bag'. On the other hand, Bagu might also mean the sound of a dog barking.

Bagubagutchi in Tamagotchi The Movie

The back of Bagubagutchi's head, a tag with Mametchi's name is visible

Bagubagutchi sleeping in his bed 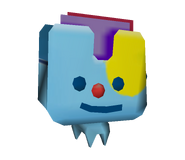 Retrieved from "https://tamagotchi.fandom.com/wiki/Bagubagutchi?oldid=96041"
Community content is available under CC-BY-SA unless otherwise noted.