Beep Beep! Ready to Take Over Tamagotchi Planet (ピポパポ! たまごっち星征服? Pipopapo! Tamagotchi hoshi seifuku?) is part 1 of episode 13 of Tamagotchi!. It aired on January 4, 2010. The creator of the episode is Yamaguchi Hiroshi.

The Spacy Brothers were playing as usual when suddenly, all the Tamagotchis except the three had disappeared! Perhaps, they can finally conquer Tamagotchi Planet!

The episode begins with a partial parody of the intro, where Tamagotchi Planet is revealed to have been modeled after Spacytchi's head, with his antenna, black sunglasses, and stick hanging out its mouth. Spacytchi's voiceover states that he'll rename the planet into "Spacy Planet" and that many changes will be made over the course of his domination. After his speech, he encourages Akaspetchi and Pipospetchi to follow him on the road to conquest.

The Spacy Brothers arrive at an empty street of Tamagotchi Town and they wonder where everyone is. They check all the stores and they all seem to be closed. Spacytchi notices an ornament that's hung on all the doors and wonders what it means. Akaspetchi starts to form an answer, but quickly throws it out. Spacytchi then decides to go to Tamagotchi School to take it over first, despite Akaspetchi's objection that it's too early to go to school. He briefly imagines himself teaching his class that 1 + 1 = 11 and then laughs to himself. He then exclaims that they're heading for school and the brothers run towards it.

They arrive at school and notice nobody is around there as well. They go around the school checking the classrooms and cafeteria, but can't find anyone around. Akaspetchi gets the idea to watch TV to find the reason for the mysterious vanishing of everyone, but upon turning on the TV there appears to be no signal, even on the other channels. Akaspetchi begins to panic, saying that he'd seen a scary movie on TAMAX-TV about a small town's population getting abducted by aliens, thinking they might be in the same situation. Spacytchi laughs and replies that aliens don't exist, disappointing Akaspetchi.

He then says that they should change plans and skip straight to taking over the planet since nobody is around. The brothers delight in this plan and proceed to draw graffiti throughout the town, swing on a swingset proclaiming they can use it 24/7, and draw Spacytchi on a billboard. Spacytchi encourages Akaspetchi to practice his evil laugh, but he is still creeped out by the complete disappearance of all of Tamagotchi Town. He says that they could have been abducted by aliens by Spacytchi still doesn't believe it. He throws out more theories, also saying that they could be trapped in another dimension or kidnapped by ghosts which Spacytchi disagrees with.

They suddenly hear a noise which they think is someone approaching them, but it turns out to just be a tin can rolling towards them. Akaspetchi gives up hope and starts crying, frightened that they'll disappear like the rest of the town. Spacytchi tries to calm him down, but begins to feel the same fright and now thinks that it's just the three of them left on the planet. Believing that they'll disappear soon, Spacytchi resolves to make the most of their time left.

They visit Waru Cafe, intending to finally go inside as they once wanted when they first came to Tamagotchi Planet. After struggling with the door and thinking the cafe is locked, Pipospetchi pushes it open and Spacytchi goes in first, stating that he's the oldest brother. Reaching the ground floor, they notice all the cafe customers appearing to be asleep. Spacytchi gets his confidence back and laughs that aliens and ghosts aren't real so they're safe. He goes to leave the cafe, but Akaspetchi is still suspicious of something being wrong with the customers. Spacytchi pokes a nearby tamagotchi, but there is no response and he chillingly discovers that they're "as stiff as a board".

Akaspetchi figures out another theory: Everyone got hit by "mutant waves" which turned them into mannequins. He dramatizes that a "photon laser" had zapped every planet in the universe and Tamagotchi Planet happened to be one of them. Spacytchi becomes mortified and they all run away to the playground. The brothers weep as their time starts to run out, but suddenly hear a grinding noise closeby. Akaspetchi thinks the noise is from outer space, but Spacytchi investigates the area and discovers Necktietchi in a plastic hut shaped like a train. Necktietchi yawns and walks out as the brothers embrace him in tears, happy that someone is still alive. Confused, he explains that today is "Roll Over the Floor Day" and is astonished that the brothers don't know about it.

The scene shows various residents of the town celebrating the day. The customers at Waru Cafe wonder about the Spacy Brothers who they saw as "screaming all over the place". Mametchi complains about how boring the holiday is and his sister agrees, but the parents tell them the holiday is important to celebrate. Lovelitchi's parents are happy to not do work today. Memetchi is as bored as Mametchi and Kuchipatchi is happily relaxing in his hot tub. Back at the playground, Necktietchi encourages the brothers to lie down and relax, hanging his ornament on Spacytchi's head. The brothers cry and roll on the floor in happiness and Necktietchi rolls with them. 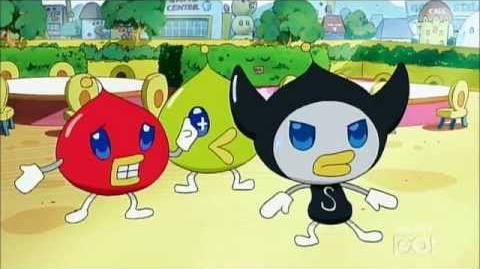 Tamagotchi! - Beep! Beep! Ready To Take Over Tamagotchi Planet
English Dubbed
Add a photo to this gallery
Retrieved from "https://tamagotchi.fandom.com/wiki/Beep_Beep!_Ready_to_Take_Over_Tamagotchi_Planet!?oldid=102695"
Community content is available under CC-BY-SA unless otherwise noted.