Male:
Bikertchi (ばんからっち Bankaratchi) is a male adult Tamagotchi. His only virtual pet appearance is on the Tamagotchi School.

Bikertchi has blue skin, pink legs, and a long pink beak. His eyes always look closed. He has yellow hair in a pompadour hairstyle with sideburns. He wears a black jacket with yellow buttons and black shoes.

Bikertchi is laid-back and tries to act cool. He has a crush on Ciaotchi, and he spends a lot of time thinking about her. He idolizes Kuromametchi. In Tamagotchi Corner Shop 3, he says he intends on following Kuromametchi for life. He is also friends with Gomasuritchi.

Bikertchi appears as a background character. He is part of the crowd that cheers when Chamametchi's egg is saved. He also appears towards the end of the movie, wearing a Royal Servant costume for the festival. 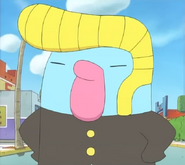 Bikertchi crying out of happiness

Add a photo to this gallery
Retrieved from "https://tamagotchi.fandom.com/wiki/Bikertchi?oldid=92031"
Community content is available under CC-BY-SA unless otherwise noted.