Bill (known as Sam (サム Samu) in Japan) is a special adult character introduced on the global release of the original Tamagotchi.

Bill has had varying appearances, though he remains to be a large head with legs. In his original Japanese artwork, he was portrayed with a large, stereotypical American head with blond hair, wearing jeans and brown shoes, with large arms in his back pockets, and blue eyes. This appearance was carried over when he reappeared in modern Tamagotchi releases, with the exception of his shoes; his original artwork had brown shoes, but he has blue feet in the updated artwork.

In is American portrayal in 1997, his head had much less detail, and had brown hair and stick legs, much like Oyajitchi. On the Tamagotchi CD-ROM and in Tamagotchi Video Adventures, he also has stick arms and is tinted a bit more pinkish.

On the Tamagotchi L.i.f.e. app, he can also be pink, or orange with blue hair.

Due to his secretive nature, Bill's personality remains shrouded in mystery. However, he is shown to have a love for jazz music and pop music and enjoy playing his saxophone.

Bill is a secret character on the international version, replacing Oyajitchi. The user must first raise a Maskutchi from a Tamatchi that started with 0% Discipline. From there, the user must provide good to perfect care, with no care mistakes. Maskutchi will evolve into Bill around the age of 10. If the Discipline meter is not entirely filled at the time of evolution, it will fill to 100% immediately upon evolving. Bill wakes at 9 AM, sleeps at 10 PM, and has a base weight of 30. Like Mametchi, it has a longer life span than other adults.

On the 2018 English replica, any Maskutchi raised from any method may evolve into Bill by the age of 18 if good care is maintained and the Discipline meter is filled.

Bill appears as a standard adult, evolving in even-numbered generations with average care. Its favorite food is beef, and it dislikes grapes.

When a Tamagotchi band auditions for their professional debut, Bill appears as a judge. Here, he wears big sunglasses. He is somewhat easy to please and will award the band an "O" or an "X" depending on the player's Tamagotchi's status; this involves hunger, happiness and stress levels, as well as the amount of time spent practicing at home. Praising it when it practices will increase the chance of the band getting an "O" from Bill.

Bill appears on the 20th Anniversary edition, evolving from Mametchi with perfect care.

Bill again appears as a Special Adult, and evolves from Maskutchi. Like in Tamagotchi Video Adventures, he is shown with arms and is more of a pinkish color.

Bill appears similar to his PC form. His original contribution to the museum is a "Stinkulator" from the planet "Galeconic", the "farthest planet in the Kruton system (for good reason)". During the expedition to Earth, he is paired up with Nyorotchi. The two bring a tape player back to the planet, which pleases Cosmotchi.

Bill was the host of the V3's "Tama Island", where users could vote for their favorite characters.

Bill appears at the Concert Hall as a judge during band performances.

The US name "Bill" was coined due to the character sprite's similarity in appearance to former US President Bill Clinton (despite the character not being directly based on him). This visual similarity is later played out in Bill's personality traits in early American Tamagotchi media.

In Japan, Bill's official name is Sam (サム), which is a reference to "Uncle Sam", a personification of the United States. Prior to his official name being revealed, he was colloquially known as Gaijintchi (外人っち), with "gaijin" means "foreigner" or "outsider". 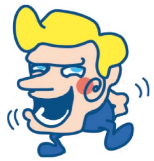 Bill, as seen in a Japanese OVA, 1997
Add a photo to this gallery
Retrieved from "https://tamagotchi.fandom.com/wiki/Bill?oldid=97603"
Community content is available under CC-BY-SA unless otherwise noted.