Billotchi was present in the 15th Anniversary Character Poll as a male adult candidate.

Billotchi's appearance is of a penguin-like Tamagotchi, with dark gray skin, dark gray-brown feet, a white belly and a large, pink bill. His bill was a pastel pink in his original artwork, but was later might a much brighter shade of pink. His body is a much lighter shade of gray in the 15th Anniversary character poll.

His favorite hobby is whale-watching. If he's going to date someone, he's already decided that it'll have to be a nice girl who'll go whale-watching with him.

Billotchi is a TMP2 adult who evolves from Pirorirotchi with average care or better, or from Propellertchi with neglect.

Marrying him to any TMP2 adult (Piratchi, Mimikotchi, or Billkotchi) will result in PuchiChocotchi being born. Marrying a partner of a different TMP will have a 50% of Kakutchi being born, and a 50% chance of the baby of the partner's lineage being born. It sleeps from 11 PM to 11 AM if it was neglected at teen stage or underwent a TMP degeneration; or from 10 PM to 9 AM otherwise.

Billotchi can be obtained in any odd generation by taking good to moderate care. Its favorite food is sausage, and it dislikes fruit juice.

His name comes from the English word "bill", which means the beak of a bird. 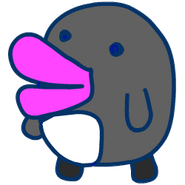 Modern artwork used for the Tamagotchi Connection Version 3.
Add a photo to this gallery
Retrieved from "https://tamagotchi.fandom.com/wiki/Billotchi?oldid=98347"
Community content is available under CC-BY-SA unless otherwise noted.