This article is about the 2012 character. You may be looking for the 1998 character of the same name.

Butterflytchi looks like a pink butterfly with a cream face. She has cream and yellow wings and a yellow "hat" that looks similar to Chamametchi's but with antennae-like ears. She has light pink lace around her neck. It is stated that she can fly with her wings, but she is never seen doing so in the anime.

She is smaller than all the other students at Dream School.

According to the Tamagotchi Friends web site, she loves Tama Pets and enjoys taking them for walks. She has a kind and bubbly personality.

Butterflytchi is obtained from Nokobotchi with 3-7 care mistakes and the Intelligence personality.

Butterflytchi is an NPC that may sometimes appear in the park.

Butterflytchi is a potential marriage partner available on the Melody, Spacy, Royal, Sanrio, and Dream versions. She is encountered at Flower Hills.

Butterflytchi is a potential marriage partner available on the Pastel version. She is encountered at the Flower Garden. Her favorite items are:

Butterflytchi is a background character in the Tama Pet class at Dream School. She only has a speaking role in an episode of Tamagotchi! Miracle Friends. Instead of "desu", she says "dechō". 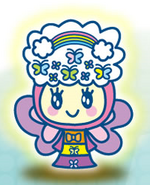 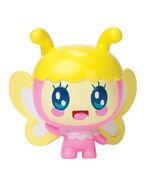 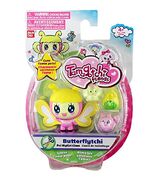 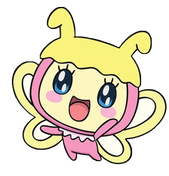 Retrieved from "https://tamagotchi.fandom.com/wiki/Butterflytchi?oldid=101046"
Community content is available under CC-BY-SA unless otherwise noted.