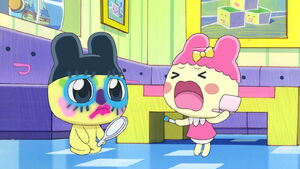 Chamametchi wants to follow the same dream as Coffretchi and thinks she's already good enough when it comes to make-up. She applies make-up to Mametchi's face and he goes to school without knowing about it. After being the laughing stock of the class, Mametchi explains to Chamametchi that she put too much on his face. Refusing to believe she isn't talented with make-up, Chamametchi dashes out of the house in anger at her brother.

While Chamametchi is walking on a road sadly, Orenetchi is seen running and kicking a soccer ball while anticipating KuroMametchi's next soccer game. A few moments later, Orenetchi kicks his soccer ball, only for him to end up flying upside down and hitting his head. As this happens, Chamametchi walks up to him, saying, "Orenetchi-chama too."

Retrieved from "https://tamagotchi.fandom.com/wiki/Chama_is_Already_Ready~!?oldid=74276"
Community content is available under CC-BY-SA unless otherwise noted.