Chamametchi's name comes from the Japanese honorific "chama". It's an uncommon word that is normally used to address peoples' names. For example, "Memetchi-chama" or "Big brother-chama" (Onii-chama).

The me left in Chamametchi's name shows her connection to the Mame family, making her name a combination of "Chama" and "Mame".

Chamametchi has pale cream skin, navy blue eyes with curled eyelashes, pink cheeks, and a curvy mouth like a cat's. She wears a pink mame cap with a yellow bow, white bottoms, and a pink shirt similar to a petticoat.

Chamametchi is very smart for her age, but also childish and a bit stubborn. However, she is ultimately sweet and kind. Sometimes she cries to get other Tamagotchis' attention. She likes drawing, daydreaming, picking flowers, and watching TV (especially Lovelin's shows). When talking, Chamametchi often uses the word chama to describe herself, or to address peoples' names and ends her sentences with "desu". Her favorite quote is "Life is Sweet!".

Chamametchi adores her big brother, Mametchi, and follows him around everywhere he goes. The reason why she adores him is because Mametchi saved Chamametchi's life when she was only an egg. She tries to be like him, but she has a short attention span and doesn't listen to what he tells her. Sometimes Chamametchi can cause a lot of mishaps, such as the time she pressed a button on a machine that made her switch bodies with Mametchi.

Chamametchi's best friends are Kikitchi and Imotchi. Chamametchi also owns a Tama Pet named Hapihapitchi. Chamametchi and Hapihapitchi love to do everything together, but on rare occasions they fight. She is also friends with Pipospetchi and is the only person besides Spacytchi and Akaspetchi who can understand him. She enjoys putting makeup on others (usually Mametchi), but most of the time it turns out looking horrible and the wearer is extremely embarrassed once he or she finds out about it.

Her profile on the Tamagotchi Pix website states "Chamametchi has various interests. Though she can be a little bit selfish, she has an honest heart. She likes having lots of Tamagotchi friends!"

Chamametchi evolves from either Hitodetchi or Tamatchi and can appear in any generation with perfect care. Chamametchi's adult evolution is based on how well she is cared for at the end of thirty hours (one day plus six additional hours). She sleeps from 8:30 PM to 7 AM.

Chamametchi can evolve from any female teen. She is obtained from above-average care.

Chamametchi is a NPC that may appear in the park or during a Tamagotchi's wedding or birthday party.

Chamametchi is obtained from a female born from a pink egg with 2-3 care mistakes or by eating Strawberry Crepe 3+ times.

Chamametchi first debuted in Tamagotchi: The Movie as an egg being taken care of by Mametchi's family. Through a series of mishaps, the egg bounced out of the house and made it all the way to the top of a building. Mametchi and Tanpopo managed to rescue the egg and it later hatched into Mimifuwatchi which then evolved into Chamametchi. Mametchi is excited over his new sister at first, but eventually gets annoyed with how she follow hims everywhere, even following him into the rocket ship on his mission to find Sunnytchi. After getting lost in space, Mametchi yells at Chamametchi for not listening to him which causes her to cry. However, he later apologizes for blowing up at her and the two make up.

Once they safely return to Tamagotchi Planet, she celebrates Gotchi King's birthday with everyone until Tanpopo has to return to Earth. Chamametchi cries and begs Tanpopo not to go, eventually waving goodbye when she finally leaves.

Chamametchi has a main role in two of the episodes. In "Mametchi's Surprising New Invention?!", Memetchi and Kuchipatchi are unimpressed by Mametchi's pen invention which makes him upset. Chamametchi adds fun features to the pen and the next day, Memetchi and Kuchipatchi are excited by the invention which cheers Mametchi up. In "Super Heroine Chamametchi!", Chamametchi transforms into Super Chama Girl to fight Beartchi who is destroying the city. It's later revealed that the whole sequence was a dream.

Tamagotchi: Happiest Story in the Universe

Chamametchi appeared in Tamagotchi: Happiest Story in the Universe! as a main character. She tries to befriend Kikitchi who rejects her friendship and later joins Mametchi and friends when they investigate the cries of help Kikitchi heard from a storybook. When Celebria is engulfed in a magical storm from the storybook losing stability, Chamametchi joins Mametchi and friends to rescue Kikitchi and restore the happy ending of the book before the storm takes over Tamagotchi Planet.

Chamametchi is a main character who attends Tamagotchi School and is in Mr. Turtlepedia's class. She is often seen hanging out with Kikitchi, Imotchi, and Hapihapitchi and occasionally joins Mametchi and friends on their adventures.

Chamametchi goes on a Tamaween adventure with Kikitchi and Imotchi in "Go Go! Tama Adventure! / Looking For The Pumpkin Soup Lake", successfully overcoming obstacles and reaching Pumpkin Soup Lake on their own. In "Hapihapitchi Helps Out!" she finds Winditchi alone in a park and stays with her while Hapihapitchi finds her missing older brother. In "You Got Me! Octodogtchi's Secret!", Chamametchi tries to befriend Octodogtchi who is extremely shy and runs away from her. After returning her grass skirt, Octodogtchi warms up to her and the two become friends. Chamametchi gets paired up with Pipospetchi in "The Great Chocolate Scramble!" and it's revealed that she can understand everything he says. The two collect the most chocolates and win the contest though Chamametchi is unable to explain how they got so many chocolates.

In "Pow! A Squabble Between Siblings?" Chamametchi and Hapihapitchi get into a big fight which ends with Hapihapitchi running away from home. Chamametchi tries to wait for her to come home, but eventually finds her at Lovelitchi's house. The two fight again, but after Chamametchi reveals that she was waiting to eat a cake with her they tearfully make up.

Chamametchi appears as a possible customer in some of the shops. She also sometimes appears in the clock tower and in the park.

Chamametchi is the player's partner when they run the My Brand shop. She supervises the shop as the player designs dresses to sell.

Chamametchi can evolve from any teen by eating seafood and fruit.

Lady Chamametchi is a role Chamametchi plays in the TAMAX-TV show, Princess Lovelin. She rules Tamagotchi Kingdom with Lord Kikitchi and is usually seen at the castle with him.

In the Tamagotchi! series, Hapichamatchi has a very evil and devilish personality, and she is one of the sisters in the Three Underworld Devil Sisters. She is often seen pulling her evil face, shouting, and using her cuteness to fool others. When Hapichamatchi cries she releases a very high loud noise that can make other Tamagotchis faint immediately.

Red Riding Hood Chama is Chamametchi's Henshin Jo transformation on the 15th Aniversary version of the Tamagotchi iD L. She is dressed up as Little Red Riding Hood from the fairy tale story and is surrounded by butterflies.

Papamametchi is Chamametchi's father who works at Mamemame Laboratory. He is protective of his family and looks after Chamametchi sometimes.

Mamametchi is Chamametchi's mother who is often seen at their house. She enjoys cooking and often dotes on Chamametchi.

Mametchi is Chamametchi's older brother. He cares deeply for her and tries his best to be a good big brother to her, even if Chamametchi causes trouble for them by not listening.

Hapihapitchi Mametchi's creation come to life from an attempt to make a machine that makes people happy. She is treated as a member of a family, rather than a tama pet, and Chamametchi considers her to be a sibling. The two are close and are often seen having adventures of their own.

Bagubagutchi is the Mame family's tama pet. He is very smart and is usually seen in Mametchi's room. 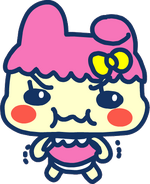 Chamametchi as Alice from Alice in Wonderland 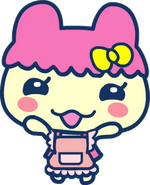 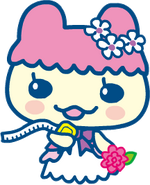 Artwork of Chamametchi flying for Tamagotchi: Happiest Story in the Universe! 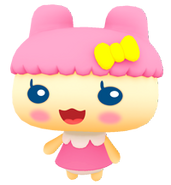 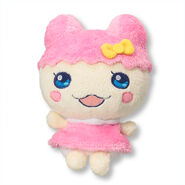 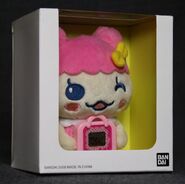