Chantotchi (ちゃんとっち) is a female adult Tamagotchi character who first appeared on the Tamagotchi Connection Version 5. She is the female equivalent of Mametchi.

Chantotchi has a round, peach-colored head and body. She wears a yellow hat with small, round ears, and she wears a red dress.

Chantotchi is smart and dependable, but not too serious. She is the typical class president and really popular. She is bilingual, being able to speak English and Japanese fluently.

Chantotchi is a Smart Family adult that evolves from any female teen whose Bonding percentage is between 80% and 100%.

If the user raises a Mametchi, keeps the bonding at 100% and is sent a Chantotchi to marry, the Mametchi Family will be earned.

Chantotchi is a Sociable Family adult that evolves from any female teen when bonding is between 0% and 30%. Upon marriage, she evolves into Mamametchi on the English edition, and Tennyotchi on the Japanese edition.

Chantotchi comes from any female teen when taking perfect care on even generations. Her favorite foods are sushi and noodles.

Chantotchi appears as a minor character in Tamagotchi: Happiest Story in the Universe!. 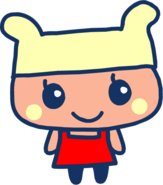 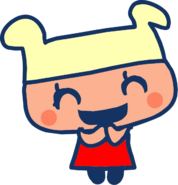 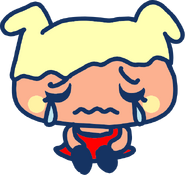 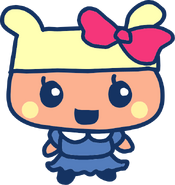 Chantotchi in Tamagotchi: Happiest Story in the Universe!

Other Chantotchi
Add a photo to this gallery

Chanto is a Japanese term used for someone who does things perfectly and properly.

Retrieved from "https://tamagotchi.fandom.com/wiki/Chantotchi?oldid=104302"
Community content is available under CC-BY-SA unless otherwise noted.