Not to be confused with Charitchi.

Charatchi has a red body with yellow arms. His head is mostly red but his face is yellow. His eyes are shaped like half circles with a straight diagonal line across the top (similar to the shape of angry or determined eyes), and in the anime he has brown irises. The top of his head has a flag-like swirl with a white stripe going across the top, making his head look like a heavily stylized music note. He wears a dim blue sleeveless shirt with a dark pink star on the front.

Charatchi is a smug but very popular and charismatic Tamagotchi, especially among girls, because of his charm and good looks. He is very fond of his Tama Pet, Chapitchi, and thinks she is the cutest Tama Pet of them all. He is a frequent customer at Music Cafe and has his own custom tea machine there that looks like him.

Charatchi is rivals with Doyatchi because they argue over who has the cutest Tama Pet.

In Tamagotchi! Miracle Friends, he is one of Madamtchi's admirers.

Charatchi is a secret character that can evolve from any male teen that connects to four different female Tamagotchis.

Raising Charatchi and bringing him to the Party House destination will transform him into "Shining Charatchi", a fan-created design that was voted highly enough to feature on the 17th Anniversary pierce.

Raising Charatchi and bringing him to the Baby House destination will transform him into "Small Charatchi".

Charatchi evolves from any male teen with poor care (Maimaitchi with 5 or more Care Mistakes, Bokuhoshitchi with four, or Cosmotchi with seven) and trained to have an Active personality. If no specific training is used, there is a 33% chance the teen will become Charatchi.

Charatchi was a marriage partner available on m!x Stations in Spring 2017.

Charatchi is a marriage partner exclusive to the app that debuted on February 1, 2020, and will be available to marry until March 1, 2020. Afterward, his genetics can still be inherited by any My Tama that may have them.

"Chara" is based on "charai" (チャラい), which is a Japanese word used to describe someone who is flashy and flirty. 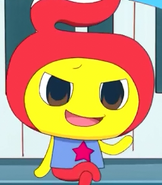 Add a photo to this gallery
Retrieved from "https://tamagotchi.fandom.com/wiki/Charatchi?oldid=96349"
Community content is available under CC-BY-SA unless otherwise noted.