Female:
Coffretchi (コフレっち Kofuretchi) is a female adult Tamagotchi character who debuted in episode 35 of Tamagotchi! Yume Kira Dream. Since then, Coffretchi has became an essential member of the Dream Town Tama-Friends. She first appeared as a raisable character on the Dream Coffret ver. pierce for the Tamagotchi P's in Japan. Her first international appearance was on the Tamagotchi Friends.

Coffret is a French word that translates to box or casket. However, Japanese speakers use coffret (コフレ kofure) to specifically mean a makeup kit. Coffretchi is named after this because she is a makeup artist.

Coffretchi has cream-colored skin, starry brown eyes, and pink cheeks. She has five eyelashes along the top of each eye, and the second eyelash on the left is curled at the end and longer than the rest. She has cream-colored fluffy hair in a side-ponytail, and a swirled tuft of hair on her forehead. She wears a small cap on top of her head which resembles a powder puff. The top of her cap is pink and has a small yellow bow in the center, the bottom is white, and a line of white lace goes around the middle. She wears a light pink short-sleeved dress, a yellow scarf, and pink stockings. She also has a white belt, and a small white and pink purse which is attached to the belt.

Coffretchi is a very talkative girl and has a habit of repeating a subject for a long time. She sometimes talks to herself as if there is another incarnation only visible to her eyes. It is easy for Coffretchi to lose her focus and become distracted at times.

Coffretchi adores makeup and uses it on a regular basis. She enjoys using it on her friends and customers. When someone is upset, Coffretchi tries to make them feel better using her Coffret Palette.

Her profile on the Tamagotchi Pix website states: "Coffretchi specializes in 'dream makeup' which improves not only facial expressions though also your feelings. And, when she gets excited, she can't stop talking!"

Coffretchi can be obtained by using the Coffret Palette three times with any female teen.

Coffretchi is a NPC that can be befriended and married at the Salon location, which is on the Fairy, Magic, Pastel, and Wonder Garden versions. Her favorite items are:

Coffretchi is confirmed to be a raisable character on the upcoming Tamagotchi Pix.

Coffretchi lives with her mother, Mamacoffretchi, and father, Papacoffretchi. They have their own salon shop known as the Dream Coffret Salon. Coffretchi also helps out at YUMEX-TV as a makeup artist. When applying make up, she uses her Dream Coffret Palette and usually sings a short tune: "Makeup is love, makeup is a dream, sparkling shining dream makeup, and the exciting finale!" (メイクは愛、メイクは夢、キラキラ輝くドリームメイク。そして感動のフィナーレ！ Meiku wa ai, meiku wa yume, kira kira kagayaku dorīmu meiku. Soshite kandou no fināre!).

Coffretchi is the drum player in the Kira Kira Girls band after Himespetchi, who was her personal favorite, left Dream Town.

In GO-GO Tamagotchi!, when Himespetchi returned, Coffretchi was excited to meet her in person for the first time. Later, she and Candy Pakupaku she becomes friends with Moriritchi, forming the MoriPakuCoffret Group. In "Dream Makeup High Society Debut", she gets extremely nervous when she was asked to help in the royal castle for a party. As first she thought she gonna to get mistreated, until Princess Tamakoko started laughing, because of the way she was paralyzed, causing her to be unparalyzed, and gain confidence in the band. In "Trying Out For the Band!", she performed with Himespetchi in the band for the first time the girls were inspired to perform together again. 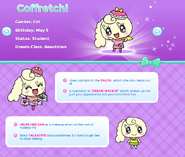 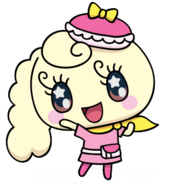 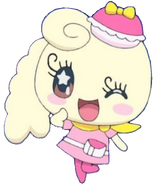 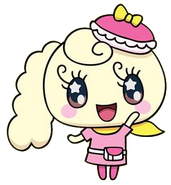 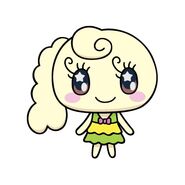 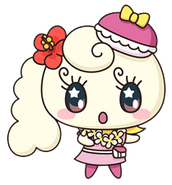 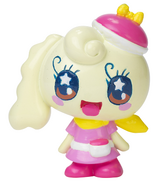 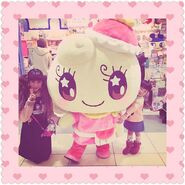