Crepetchi (くれーぷっち Kurēputchi) is a female adult character that first appeared in the anime Tamagotchi! Yume Kira Dream. She was released as a raisable character on the Berry Sweets ver. Tama Deco Pierce for the Tamagotchi P's.

Crepetchi looks like a crepe wearing a pink suit with a white heart on it. On her head she has two strawberries which look like ears, a tuft of hair which looks like it is made from cream, a chocolate heart, and some white cream with two red berries.

Crepetchi is a secret character obtained from feeding the Upside Down Crepe 3 times to any female teen.

Crepetchi is in the cooking class at Dream School. The food she makes is very delicious and popular. One time she won a cooking contest against Karakutchi, Amakutchi and Kuchipatchi. In episode 31, she competed in a sweets contest hosted by Wagassiertchi.

Crepetchi is in the DoriTama School's cooking class. She appears in episode 25. 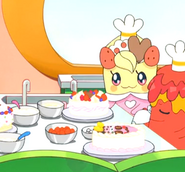 Add a photo to this gallery
Retrieved from "https://tamagotchi.fandom.com/wiki/Crepetchi?oldid=95772"
Community content is available under CC-BY-SA unless otherwise noted.