There are two singers in D2 - Daisy Dance and Dahlia Diva. Daisy is the main singer; she has light yellow skin, with two bunny-like ears held by a pink scrunchie. Her eyes have two eyelashes on the top and bottom, white heart-shaped reflections, and magenta irises. She wears a red leotard over a black sleeveless v-neck shirt, red shorts, and black stockings.

Dahlia has pale pink skin, pink cheeks and purple hair. Her eyes have three eyelashes on top, two on the bottom, white circular reflections, and indigo irises. She wears a pink headband with a pink heart on it, round pink earrings, a blue leotard over a black sleeveless v-neck shirt, a blue skirt, and purple stockings with dark purple shoes.

They both work at YUMEX-TV in Dream Town, located on the tip of the dark blue petal. One of their songs is Kirakira☆Dream. They can be heard singing this song in episodes 10 and 37.

The name D2 stands for 'dream 2', but also comes from the fact that there are two singers, and both their names begin with the letter D. 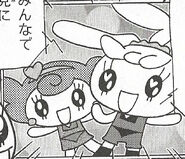 D2 in a manga panel from GOGO♪ Tamagotchi!

D2 in a magazine

Add a photo to this gallery
Retrieved from "https://tamagotchi.fandom.com/wiki/D2?oldid=90278"
Community content is available under CC-BY-SA unless otherwise noted.