Male:
Daikutchi (だいくっち) is a male adult Tamagotchi character. He is a woodworker, and Tonkatchi is his partner. His function on the virtual pets he appears on is to remodel the Tamagotchi's house.

Daikutchi has a square-shaped body and light orange skin. He has short, straight black hair and thick black eyebrows. His eyes are small and circular, and he has a pink beak. He wears a white headband, a light-brown haramaki over white pants, and light yellow sandals with black straps. He often carries a double-edged hand saw.

Daikuchi is very skilled at renovating. He is a bit stubborn and takes great pride in his work. He may speak hastily or roughly, but beneath his tough exterior he is actually kind and tender-hearted.

Daikutchi appears on the Tamagotchi On with Tonkatchi whenever the tamagotchi gets their room remodeled. He also may appear during a tamagotchi's wedding in the crowd.

Daikutchi appears as a minor character in Tamagotchi!.

In "Get Ready! The Big Race on Tama Street he participates in the Tama Street race and is seen instructing others how to stack giant pencils and competing with Gozarutchi on who has the best balance. He later helps Mametchi save Kuchipatchi by letting him use the giant pencils from earlier.

In "Tama-Lucky Lottery" he loses his wallet and Chamametchi and Mametchi return it to him. He rewards them with a fully stamped lottery ticket. 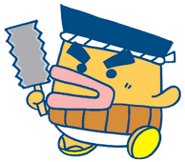 Add a photo to this gallery
Retrieved from "https://tamagotchi.fandom.com/wiki/Daikutchi?oldid=104151"
Community content is available under CC-BY-SA unless otherwise noted.