Dazzilitchi has creamish white skin with blonde hair and a fuchsia flower on her head. She has rosy cheeks, a lavender and plum colored sleeveless shirt, a dark purple skirt, and light brown boots.

The anime version of Dazzilitchi has a slightly different appearance. Her shirt is all over lavender and is vee-necked, as well as exposing her stomach. Her skirt is deep fuchsia, and the flower on her head has six petals instead of seven. Her arms are the same color as her skin.

On the Music City website, the user must obtain a Rank 4 Gold CD and exchange it for the Girl's Destiny Star. The item must then be transferred to the user's toy. The item can be used on any female adult.

As the Music City website is no longer operational, Dazzilitchi can no longer be obtained.

When with a female teen character (Morutchi, Mikazukitchi, or Puddingtchi), the user must connect it with six different Tamagotchi toys.

Dazzilitchi makes several cameo appearances along with Dreamitchi in the Tamagotchi! anime. She is an actress at TAMAX-TV and also hosts game shows. Dreamitchi is very popular with the girls, but it is not known if Dazzilitchi is popular with boys. However, it is known that ADtchi has a crush on her. According to Uwasatchi, it is rumored that Dazzilitchi and Dreamitchi are dating.

Halloween costume
Add a photo to this gallery 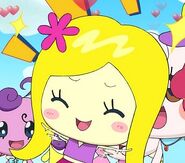 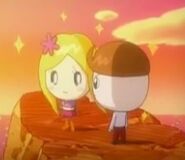 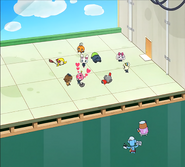 Add a photo to this gallery
Retrieved from "https://tamagotchi.fandom.com/wiki/Dazzilitchi?oldid=103379"
Community content is available under CC-BY-SA unless otherwise noted.