Male:
Debatchi (でばっち Debatchi) is a male adult Tamagotchi character that debuted on the Keitai Kaitsuu Tamagotchi Plus in Japan and on the Tamagotchi Connection Version 2 internationally.

Debatchi has a round, yellow body with a tremendous overbite, with two large, square teeth exposed. He has two wing-like arms, stick legs, and three strands of black hair on top of his head.

Debatchi is cheeky but very likable, and tells funny jokes to get attention from others. This Tamagotchi has two remarkably long buck teeth that are his trademark. He likes to gnaw and chew and smile.

Debatchi is a gender-neutral adult that can be obtained on odd generations from good physical care but average emotional care. It evolves from either Ringotchi, Ichigotchi, or Nikatchi (Tomatchi on the Akai). It sleeps at 10 PM and wakes at 8 AM. Its unique items are a pair of sunglasses and a paper fan.

Debatchi a gender-neutral adult that can be obtained on even generation from above average care. Its favorite food is pairs, and it dislikes pasta. Its base weight is 30, it sleeps at 10 PM, and wakes at 9 AM.

Debatchi is a male universal adult who evolves from any one of the teen characters with a Skill Points total of under 80 and average care. He sleeps from 10 PM to 9 AM.

Debatchi's data is present in the TamaTown Tama-Go's ROM as a male adult, but he cannot be obtained.

Debatchi makes background cameos in both Tamagotchi: The Movie and Tamagotchi: Happiest Story in the Universe!. In the GO-GO Tamagotchi! episode Who's the Champion!? Comedy Contest, he is partnered with Doyatchi as a comedy duo. They fail to amuse any of the judges except for Melodytchi. In episode 50, they partner together again to cheer up the Tamagotchi Planet, but their routine is so bad that they actively make the situation worse.

Debatchi's "red" form that appears on the Keitai Kaitsuu! Tamagotchi Plus Akai. It can be either gender and can be obtained in the same way as Debatchi. 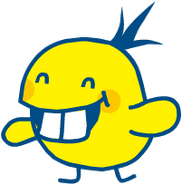 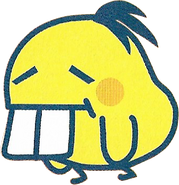 Add a photo to this gallery
Retrieved from "https://tamagotchi.fandom.com/wiki/Debatchi?oldid=96632"
Community content is available under CC-BY-SA unless otherwise noted.