Both genders:
Debutchi (でぶっち) is a character that debuted on the Tamagotchi Osutchi and Mesutchi.

Debutchi looks like a large, round, pink blob with narrow eyes, a large mouth, and chubby cheeks.

Debutchi is a gluttonous Tamagotchi that allowed itself to indulge too much with food. While it knows it needs to become healthy again, it may sneak food if not closely monitored.

Debutchi is a neglect evolution that can happen to any character of any growth stage, with the exception of the Kuritchi born during the First Generation or if the character is an adult with a baby. A character will evolve into Debutchi if their weight is brought up to 99.

Once in this state, Debutchi's options are limited to the Check meter, the game, and the Discipline icon. Debutchi will never go to the bathroom; any poo that was on the screen prior to evolving will reappear once it turns back to normal. Debutchi will go to sleep at the previous character's regular hours, but the light icon will not be accessible. If the previous character was still a child or teen, Debutchi will still make Discipline calls. Its Hungry and Happy hearts will continue to empty at the same rate as they were before the evolution, but with the Food icon inaccessible, the Hungry hearts cannot be filled. 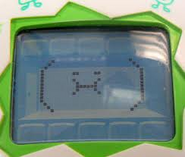 Debutchi appears on an Osutchi

A sticker of Debutchi
Add a photo to this gallery
Retrieved from "https://tamagotchi.fandom.com/wiki/Debutchi?oldid=98413"
Community content is available under CC-BY-SA unless otherwise noted.