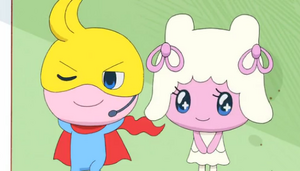 Dokidoki! Audition Soon (ドキドキ！もうすぐオーディション Dokidoki! Mōsugu ōdishon) is part one of episode 11 of GO-GO Tamagotchi!. Along with part two, it is episode 232 overall. It first aired on June 12, 2014.

When the two girls are at TAMAX-TV preparing for the audition, Madonnatchi overhears them mention the fact that they're from Idol Academy. She and Herotchi scheme to make sure the girls will fail the audition. Madonnatchi walks up to them and acts sad and cute, asking them to get something for her. Yumemitchi and Kiraritchi follow Madonnatchi away, and Herotchi steals their bag. He also takes Madonnatchi's bag and throws all three dresses into a washing machine at the laundromat.

When Yumemitchi and Kiraritchi come back, they find that their bag is missing. The audition is starting very soon and they become worried. They look for the bag, but to no avail. Luckily, Mametchi, Memetchi, and Kuchipatchi meet the girls, who tell them of their dilemma. Kuchipatchi seeks out the bag by using his excellent sense of smell and the friends end up at the laundromat.

Mametchi finds the dresses in a washing machine, but they have shrunk. Yumemitchi and Kiraritchi are distressed. Kuchipatchi also finds another shrunken dress in the machine, but nobody knows whose it is. Then, Miraitchi and Clulutchi have an idea and they use their Pocket Designers to fix Yumemitchi's and Kiraritchi's dresses. The two girls are very grateful.

Later, Madonnatchi sees that her dress is missing as well and gets mad at Herotchi when she finds out he shrunk it in the washing machine along with the other dresses.

Retrieved from "https://tamagotchi.fandom.com/wiki/Dokidoki!_Audition_Soon?oldid=89617"
Community content is available under CC-BY-SA unless otherwise noted.