Donutchi's body resembles a donut with two eyes on top and short brown arms and legs sticking out of the sides and bottom. His mouth is the hole in the center of the donut. The anime depicts him as having reddish-brown irises.

Originally, Donutchi's artwork for Tamagotchi School depicted him as having pink frosting with red, yellow, and blue sprinkles. In later appearances, he resembles a plain donut.

Donutchi has a minor role where he runs the donuts store. He cannot be raised.

Donutchi is a minor character who runs the Tama Donuts shop in Tamagotchi Town. He adds the word "Nutchi" to the end of every sentence.

He has a major role in "Battle On! The Great Donut Contest!" where he holds a Homemade Donut Contest and acts as one of the judges along with Necktietchi and Safetytchi. The winner would get their donut on the menu and a year's supply of donuts.

Donutchi's name is derived from the English word "donut". 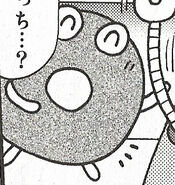 Add a photo to this gallery
Retrieved from "https://tamagotchi.fandom.com/wiki/Donutchi?oldid=104232"
Community content is available under CC-BY-SA unless otherwise noted.