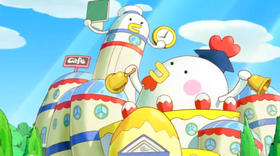 DoriTama School (ドリたまスクール Doritama sukūru) is a school in DoriTama Town. It is a combination of Tamagotchi School and Dream School, and it was formed by the Tamagottsun. It first appeared in GO-GO Tamagotchi!, and it is a visitable location on the Tamagotchi 4U.

DoriTama School has the two living mascot Tamagotchis of the previous schools, and they now make announcements together. The inside of the school has many classrooms, and most of the doors to the classrooms are alive and have different personalities. Similar to Dream School, a lot of classes split up the students into smaller groups, usually about five to a class. Several rooms have glass roofs, such as the cafeteria. There are actually many hallways and maze-like areas in DoriTama School, as seen in episode 7. Many of the hallways have very colorful art.

At the start after the Tamagottsun, Mametchi and friends went into doors that transported them into random classes. Himespetchi and Neenetchi were upset that they didn't end up with their crushes. Now, most Tamagotchis walk on the floating paths connected to classes. Some classes are also held outside.

DoriTama School in the opening song

The door to the school council

The door to the music classroom

The door to the cooking classroom
Add a photo to this gallery
Retrieved from "https://tamagotchi.fandom.com/wiki/DoriTama_School?oldid=95995"
Community content is available under CC-BY-SA unless otherwise noted.