Both genders:
The Doribons (どりばんず Doribanzu) are a trio of comedians who work at YUMEX-TV. They first appeared in the anime, Tamagotchi! Yume Kira Dream.

Harisen wears a light brown suit with a yellow bowtie and and four yellow buttons. His head is pear-shaped and his face is a light cream color. He has curly yellow hair on the top of his head which sticks up, a green beak, and black circular eyes. His name means "slapstick".

Yuruyuru wears a blue suit with a green bowtie and four yellow buttons. His head is shaped like an upside-down "T" and his face is a light peach color. He has two green, ribbon-like hairs on the top of his head. He has a light red beak, pink cheeks, and oval shaped eyes with purple irises. His name means "slowly" or "leisurely".

Tarai wears a yellow suit with a red bow and a pocket at the front. She has a round head, two dark orange pigtails, and a light pink face. She has black dot-like eyes, pink cheeks, and an orange beak. She has a crush on Okaytchi. In episode 37 of Yume Kira Dream, she becomes Okaytchi's girlfriend. They become engaged in episode 5 of Miracle Friends. Her name means "tub", and she is named this because of the tub on her head. 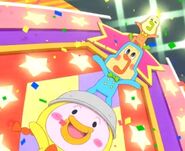 Tarai with Okaytchi
Add a photo to this gallery
Retrieved from "https://tamagotchi.fandom.com/wiki/Doribons?oldid=85686"
Community content is available under CC-BY-SA unless otherwise noted.