Male:
Dorotchi (どろっち Dorotchi) is an adult Tamagotchi character who debuted on the Keitai Kaitsuu Tamagotchi Plus in Japan, and the Tamagotchi Connection Version 2 internationally.

Dorotchi resembles a white, round ghost with a wiggly "tail".  He has small blue eyes and a Kuchipatchi-like mouth.  He has arms dangle in front of him.

This floating Tamagotchi appeared suddenly and mysteriously one day. He doesn't have much of a presence, but he's very kind to everyone. Dorotchi may look like a ghost, but he doesn't try to be mean. He likes ice skating, but he just wears skates on his arms and floats above the ice.

Dorotchi appears on even generations from good physical care but poor emotional care. If the previous generation was a Violetchi who married a Mametchi (from another Keitai, not from the Matchmaker) with both at 100% discipline, Dorotchi will eventually evolve into Paparatchi. His unique items are a well and a pointed cap (similar to Obaketchi's).

Dorotchi is a gender-neutral adult that can be obtained on even generations with average care on both devices, going to sleep at 10pm and waking up at 8am. Its favorite food is corndogs, and it dislikes crackers on the V2 and apple pie on the V3.

Dorotchi is a male adult that can be obtained on even generations with average care.

Dorotchi first appeared in Tamagotchi: The Movie as a background character. He appears in the Tamagotchi! anime as a member of Mametchi's class at Tamagotchi School. He later appeared in GO-GO Tamagotchi!.

His name most likely comes from doron, a Japanese word meaning "to abscond" (to leave quickly and secretly and hide oneself). He may be called this because ghosts are said to be able to disappear. 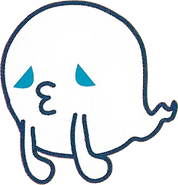 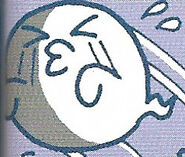 Dorotchi in a manga panel from GOGO♪ Tamagotchi!
Add a photo to this gallery

Dorotchi and Young Dorotchi
Add a photo to this gallery
Retrieved from "https://tamagotchi.fandom.com/wiki/Dorotchi?oldid=95112"
Community content is available under CC-BY-SA unless otherwise noted.