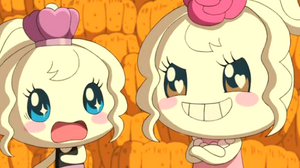 It is almost Tamaween on Tamagotchi Planet, and Mametchi and his friends are at Dream School, discussing the upcoming Tamaween Event. Kuchipatchi can't wait to try pumpkin dishes, Memetchi anticipates the Tamaween-themed costumes, Pianitchi wants to perform with the Music Class at the event, and Coffretchi looks forward to watching the dancers.

Later, Mametchi is talking with Miraitchi, Clulutchi, Coffretchi, Pianitchi, Amakutchi, and Doyatchi about creating a pumpkin monument for the event. The classmates go into a room full of pumpkins, including a big one, and then Mametchi tells Miraitchi and Clulutchi that there will be a contest for the Tamaween costumes. The best female entrant will be known as the Pumpqueen, and the best male entrant will be known as the Pumpking.

The Spacy Brothers are talking about the costume contest as well. Spacytchi tells Akaspetchi and Pipospetchi that he will dress up, and if he becomes the Pumpking he will also be able to become king of Tamagotchi Planet. Pipospetchi says something in his beep-like language, and what he says scares Spacytchi and Akaspetchi. Spacytchi says that he must become king, but then Karakutchi walks past, so Spacytchi quickly says he must become Pumpking instead. Karakutchi remarks to himself that Spacytchi won't succeed in becoming Pumpking.

Mametchi and his classmates are still trying to come up with a good idea for the pumpkin monument. Meanwhile, Smartotchi is walking through the hall in Dream School when he hears piano music. It is coming from the Music Class; he looks through the window and watches the students play their Smapis. After a short time, he walks away, but Pianitchi notices him and abruptly stops playing. Takutotchi asks her what's wrong, and she insists it's nothing and says she is sorry. Then she wonders to herself if Smartotchi really was listening to her music.

That night, Miraitchi and Clulutchi are at a table with pumpkin monument designs on paper in front of them. They get upset that their ideas aren't good, and then Madamtchi enters the room with some tea. She tells the girls not to worry and that they will come up with good ideas soon; they just have to be in the right mood. She tells them that maybe they'd prefer designing clothes, and then the two twins take out their pocket designers. They begin designing Tamaween outfits, and the next morning, many customers have come to the shop to see their designs. Miraitchi and Clulutchi show the customers lots of different clothes and accessories on their pocket designers. The girls look at the sign of the shop, and they suddenly come up with a good idea for the pumpkin monument.

Later, Miraitchi and Clulutchi show their design to Mametchi and the others - a pumpkin tower. The friends admire the twins' design. Spacytchi is putting up posters to vote for him as the Pumpking. Karakutchi puts up a poster next to his; he as mad at Spacytchi, but Spacytchi doesn't understand why. Meanwhile, the friends are working on the pumpkin tower; they have gathered many pumpkins and are piling them up. They are talking while working, and Doyatchi tells the others to say "doya" like he does. Miraitchi goes "doya", and she asks Clulutchi to, but she doesn't want to. Then Mametchi, Pianitchi, Coffretchi, Amakutchi, and Watchlin go "doya" and everyone laughs except for Clulutchi, who just smiles awkwardly.

While Karakutchi is still chasing after Spacytchi, and putting his Pumpking posters over Spacytchi's, the students of the various classes of Dream School are making preparations. Later in the day Mametchi and the others are almost finished their pumpkin monument; Mametchi uses a small crane to put a giant pumpkin on top. All of a sudden Spacytchi runs over to them, crying out for help. Mametchi wonders what is wrong, and then Karakutchi arrives. He sees Spacytchi and looks very angry; he declares that Spacytchi must give up on becoming Pumpking. Then Karakutchi accidentally bumps into the pumpkin monument; it wobbles ominously and the friends panic. However, it soon stops, and they breathe a sigh of relief.

A bird flies over to the pumpkin monument and lands on top. All of a sudden, the tower of pumpkins comes crashing down and the pumpkins roll everywhere. The friends have to start making the tower all over again, so Mametchi and the others retrieve all the pumpkins. Karakutchi and Spacytchi help too, but Karakutchi is still mad at Spacytchi.

Pianitchi is carrying three pumpkins at once and she drops one of them. It rolls away and lands in front of Smartotchi. He picks it up and gives it back to Pianitchi. She thanks him, but he walks away without a word. She calls out to him and says she can't wait for him to join Music Class so they can perform together. Smartotchi pauses, but then he continues to walk away.

Before long, the tower of pumpkins is complete again, but Miraitchi points out that the giant pumpkin is missing. Mametchi is baffled and so they ask around Dream School if anyone has seen a giant pumpkin. When they check the cooking class, they are surprised to see that Kuchipatchi is using the giant pumpkin to cook pumpkin soup. Mametchi tells him it was the pumpkin for their monument, and he lets them have it back. The friends can then finish their monument again.

It is nighttime and Smartotchi is in his room. X says that they should go to the Tamaween Event because they might be able to catch a Dreambakutchi there. Smartotchi agrees, and then Enchoutchi comes in; X quickly disguises himself as a vase. Enchoutchi sticks some flowers into X's head and after he talks to Smartotchi, he begins to leave the room. X jumps up and down angrily but then Enchoutchi turns around to say goodnight to Smartotchi, and X quickly returns to his disguise again. When Enchoutchi is finally gone, X complains about the flowers and then Smartotchi walks to the window. X watches him curiously; Smartotchi seems to have some thoughts on his mind.

The next evening, the Tamaween Event is occurring. Kuchipatchi is very excited because he likes the flavor of pumpkins. The Music Class is performing on a stage and many Tamagotchis are watching. Pianitchi is playing her Smapi when she notices Smartotchi not too far away, listening to the music with his eyes closed. Pianitchi smiles to herself and keeps playing the song. As the song is ending, Smartotchi looks around, apparently searching for Dreambakutchis. He walks past Gotchimotchi, who appears to be enjoying the event. After Smartotchi is gone, the green Dreambakutchi appears, and Gotchimotchi (having met it in a previous episode) pats it fondly. Someone calls Gotchimotchi's name, so he gets up to walk over them, but when he looks back, the Dreambakutchi is gone.

It is time to announce the winners of the costume contest. Everyone is gathered around the pumpkin monument, and first the Pumpqueen winner is announced - Jurietchi. Karakutchi is disappointed that it isn't Amakutchi. Next, the Pumpking is announced, who is Kuchipatchi, and Spacytchi is horrified.

Later, the Tamagotchis are dancing together to slow music. Smartotchi is still looking around for Dreambakutchis, and then Pianitchi sees him. She thanks him for listening to her song, and he is just about to walk away when she asks if he wants to dance. Before he can give a full answer, she takes his hand and leads him over a place on the ground where some light is shining. The two of them dance together; Pianitchi is smiling at Smartotchi, but he just glances at her shyly. Pianitchi asks if he's looking forward to performing in Music Class together with her, and after a moment he quietly agrees. Pianitchi is happy and they continue to dance.

Retrieved from "https://tamagotchi.fandom.com/wiki/Doya!_Tamaween_Tumult?oldid=51296"
Community content is available under CC-BY-SA unless otherwise noted.