Dream Coffret Palette (ドリームコフレパレット Dorimu Kofure Paretto) , also called Coffret Palette for short, is an item from Tamagotchi! Yume Kira Dream. Coffretchi uses it to apply make-up to customers at Dream Coffret Salon, and is the only one to use this item. Sometimes she uses it on her friends and other Tamagotchis she meets. The make-up inside is called "Dream Make-up" and it can not only improve someone's appearance, but it also can lift their spirits. It resembles to the Yume Kira Bag in some degree. However, how Coffretchi obtained it is still unknown.

Bandai made a toy version called Make-Up Stamp Dream Coffret Palette. It was released on June 2013 and sold for 2,800 Yen.

Unlike many toys based on anime items, this one is not electronic. It is basically a stamp set that allows users to put pretend make-up on pictures of the characters' faces. It comes with some papers, stamps, and six different colors of ink - blue for stamping the outlines of characters' faces, and pink, purple, green, yellow, and red for lipstick, eyeliner, and other make-up.

Coffretchi and her Coffret Palette (not actual size) 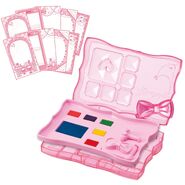 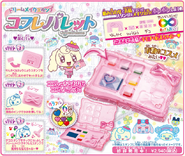 Advertorial for toy
Add a photo to this gallery

Retrieved from "https://tamagotchi.fandom.com/wiki/Dream_Coffret_Palette?oldid=100309"
Community content is available under CC-BY-SA unless otherwise noted.