There are a total of eight Dreambakutchis, and they all have the same body shape, but different colors. A Dreambakutchi resembles a tapir with white wings, and furry stripes that go around the stomach which are paler than the rest of their body. They have pointed snouts and small ears. The only difference between male and female Dreambakutchis is their eyes (females have a white shine in their eye and eyelashes; males have slanted eyes with no white shine or eyelashes). Yellow, green, blue, and purple ones are male, while red, orange, cyan, and pink ones are female.

While they are called Dreambakutchis in general, each one has its own name depending on its color. For example, the pink Dreambakutchi is called "Pinkbakutchi" and the orange one is called "Orangebakutchi".

Dreambakutchis are very sensitive; they can feel and will sometimes reflect nearby emotions. They only approach Tamagotchis they trust. If they are caught by force, they get very upset. When they are scared, they turn transparent and flee. They leave a trail of sparkles behind them when they fly.

They are elusive and don't like to be caught. They usually fly very high and are also good at hiding. Because of this, if a Tamagotchi finds a way to fly too, catching them becomes easier.

They possess strong magic, which is so powerful that can send anyone back in time, which can be uncontrollable.

Dreambakutchis were originally kept in Dream Center research facility in the future version of Dream Town, until Smartotchi set them free so he could steal them. However, the Dreambakutchis then unleashed great power that Watchlin unintentionally absorbed, causing her and everyone in range to be sent back in time.

Collecting the Dreambakutchis becomes the main objective for Miraitchi and Clulutchi using the Pocket Designer, so that they can return to their own time period.

Although they came from the future, in episode 2 of Tamagotchi! Miracle Friends, there appears to be an ancient script about these creatures, so it is implied that they might exist long ago.

Baku is the name of a Japanese mythical creature. It is a tapir-like spirit that feeds on dreams and nightmares. Dream could be derived from Dream Town, or the fact that bakus eat dreams.

The eight Dreambakutchis in the anime

Artwork of all the Dreambakutchis 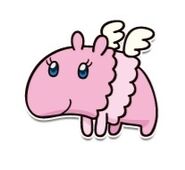 Miraitchi trying to catch Dreambakutchis
Add a photo to this gallery

Retrieved from "https://tamagotchi.fandom.com/wiki/Dreambakutchi?oldid=95794"
Community content is available under CC-BY-SA unless otherwise noted.