Eiga Tamagotchi: Himitsu no Otodoke Dai Saisuken! 映画たまごっち ヒミツのおとどけ大作戦! is a Tamagotchi short film that was released with the Kami-Sama Minarai: Himitsu no Cocotama movie on April 28th, 2017. The film is approximately 10 minutes in length and was made in celebration of the 20th anniversary of the Tamagotchi franchise. It is the second short film in the franchise after Tamagotchi Honto no Hanashi.

The film begins with Mametchi, Lovelitchi, Memetchi, Kuchipatchi, and new character Nijifuwatchi riding on a large blue car-like vehicle. They have been tasked to deliver an important package to the Gotchi King. Their journey goes uninterrupted for a while, but they soon get approached by a larger vehicle equipped with a giant mechanical claw, which attempts to grab the package they are delivering. The fivesome try to think of ways to stop the vehicle.

Kuchipatchi eats a banana, then throws the peel on the road in a failed attempt to make the vehicle slip on it and lose control. The vehicle is then revealed to be operated by Spacytchi and his brothers, who believe that the package contains Cocotama, prompting them to get the package in their continued mission to take over Tamagotchi Planet. The larger vehicle's mechanical claw then gets a grip on the package, resulting in a brief tug o' war between it and Memetchi and Lovelitchi, which ends with the package falling off a cliff before being picked up by Nijifuwatchi, who places it back in the large blue car-like vehicle.

The chase continues, but not without a sequence of Spacytchi's vehicle getting the mechanical claw broken and crashing into things before finally breaking apart due to Pipospetchi. Mametchi gets relieved that they're no longer being chased, but Lovelitchi points out that they're approaching Tamagotchi School. The blue car then comes to a sudden stop, with the package sliding off of it, which opens to reveal an egg that rolls toward the school. The fivesome and the Spacy Brothers chase after it and the egg starts to hatch. The Spacy Brothers believe that this is their promised moment, but the egg turns out to have Oyajitchi inside, much to the confusion of the fivesome and the utter dismay of the Spacy Brothers. Gotchi King, Princess Tamako, and some Royal Servants appear before them, informing them about the egg and its importance to their well-beings.

Later that night, a 20th Anniversary party is held outside of Tamagotchi School, with numerous characters from throughout the anime and the connection era of the franchise watching a fireworks display. All the Tamagotchis enjoy themselves during the party except for the Spacytchi and Akaspetchi, who instead grieve over yet another failure. 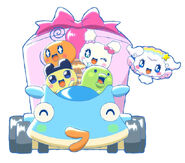 Promotional artwork for the film

The logo as it appears in one of the film's promos 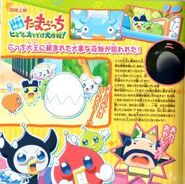 Story program for the film 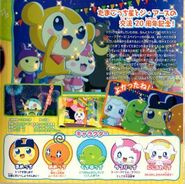 Story program for the film

The Tamagotchi device that appeared in this film

The stage that appeared at the end of the film