Eiyuutchi (えいゆうっち) is a character who debuted on the Tamagotchi Connection Version 5 Celebrity. He also appears on The Celebrity Cruise in Tama & Earth EXPO, and on the Tamagotchi iD L 15th Anniversary Version Character Poll as a male adult candidate.

Eiyuutchi is based upon the famous explorer, Christopher Colombus. He has white skin, blue eyes, pink cheeks, and yellow hair. He wears a black and yellow cap with a yellow feather, a black shirt with yellow epaulettes, and a red cape.

A Tamagotchi with great ambitions. It has a vigorous heart and a curious nature that loves adventure.

Eiyuutchi evolves from Mametchi when fed the Golden Bean snack. Upon marriage, he evolves into Teitokutchi.

Eiyuutchi appears in the first season of Tamagotchi!, where he makes background appearances in TAMAX-TV. He also appeared as a background character in episode 45 of GO-GO Tamagotchi!. 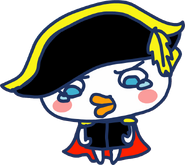 Eiyuutchi in Tamagotchi: Happiest Story in the Universe! 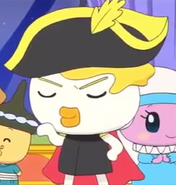 Add a photo to this gallery
Retrieved from "https://tamagotchi.fandom.com/wiki/Eiyuutchi?oldid=88181"
Community content is available under CC-BY-SA unless otherwise noted.