Ekakitchi has a body similar to Kuchipatchi's. It has light pink skin, a white stomach with a pink swirl on it, a yellow beak, and dark round eyes. It wears a red beret with a heart design identical to the one on Ciaotchi's hat. It usually holds a paintbrush.

Ekakitchi's stomach can be painted or drawn on.

Ekakitchi briefly appears as a background character in Tamagotchi: The Movie. It is seen with Ciaotchi when all of the Tamagotchis are trying to wake up Blackholetchi.

Ekakitchi debuted on the Tamagotchi School's website. It mainly appeared in one of the mini-games, in which the player paints pictures on Ekakitchi's stomach. 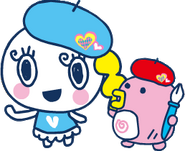 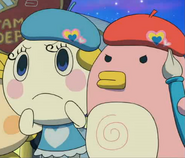 Ekakitchi and Ciaotchi in Tamagotchi: The Movie
Add a photo to this gallery

Retrieved from "https://tamagotchi.fandom.com/wiki/Ekakitchi?oldid=100348"
Community content is available under CC-BY-SA unless otherwise noted.