The Evatchi (エヴァっち) (에바치 in Korean), also known as the Multipurpose Egg Shaped Decisive Weapon Evatchi (汎用卵型決戦兵器 エヴァっち) (범용 난형 결전병기 에바치) is a licensed Tamagotchi Nano model based on the anime series Neon Genesis Evangelion. It was released in Japan, Korea, and Hong Kong on June 13th, 2020. It was released in the USA on April 2, 2021. It retains its original Japanese design, packaging and programming, with English instructions available on Bandai's official site.

The story of Evangelion takes place fifteen years after a global cataclysm known as the Second Impact. The protagonists are teenagers that are tasked with piloting robots called "Evangelion" to fight monsters known as "Angels" at the behest of the shadowy organization called NERV. The Evatchi has its own dedicated backstory, as shown on the official Bandai and Amazon pages:

Special Governmental Agency NERV has developed the technology to apply retroversion on Angels, forcing them into their embryonic state to be raised in egg-shaped containers filled with L.C.L. The egg-shaped armored containers are built to restrain Angel from its rampage and allow people to carry them outside of the organization’s laboratory. As a member of NERV, you have been assigned to raise the Angels using the ‘Evatchi’, and based on how you handle various events, the Angel will grow into various forms. Attend to any instances of L.C.L. corruption and break through all generated A.T. Fields!

After the clock is set, a screen showing the Second Impact will appear for several seconds before the embryo Angel hatches from its bakelite container. There are four growth stages: baby, cocoon, adult and special. It will stay as a baby for 24 hours before evolving into a cocoon, and the cocoon will be able to evolve to the adult stage three hours later when the A button is pressed. If the adult Angel reaches the conditions for a special evolution within 72 hours, it will become a cocoon again and then evolve into the special character; otherwise, it will depart on its own.

After 24 hours, the baby will evolve into a Cocoon. During this time, the user will not be able to feed it, play games, or check the status, only switch to the clock and turn the sound on and off. After three hours, the evolution sequence will play and the cocoon will enter an incubation state, where it will stop moving. When the user presses the A button, the cocoon will evolve into its next growth stage. Waiting longer periods of time to evolve it will alter which Angel it becomes. It will become a cocoon a second time if an adult Angel reaches conditions necessary for a special evolution.

There are no on-screen icons, and therefore all information is conveyed through the screen and buttons. The Angel is cared for by filling its meters; it has Hungry and Happy meters, each consisting of four units, which are both empty when it's born. The Hungry meter decreases by one unit per hour, and the Happy meter decreases by one every 50 minutes. If either becomes empty, the Angel will call for attention to fill them.

If the Angel needs something, the user can press the C button for an animation to see what it needs. If the Angel shows a dizzy emote, it's hungry; if it shows a scowling emote, it's unhappy. If both Hungry and Happy meters are partially filled, it will perform a happy animation. If the Happy meter is full and the Hungry meter is not empty, it will perform a Close Up.

Pressing the A button opens the main menu, with the options to feed or to play the games. The meal option (S² Engine) fills one Hungry unit, and will refuse to eat anymore once the meter is full. The snack (watermelon) fills one Happy unit, and can be fed even when the Happy meter is full. The A button is also used to open the lights on and off menu when the Angel has fallen asleep. The baby form sleeps at 8 PM, while evolved Angels sleep at 10 PM. All characters wake at 7 AM, and will turn the lights on themselves when they wake up. The cocoon form does not sleep.

Throughout the day, the LCL around the Angel will get dirty. Pressing the A button will clean it. The longer the user waits to clean it, the more dirty the LCL will become. The user will not be able to feed or play games until the LCL is cleaned.

Similar to sulking seen on previous Nano models, if the Angel is neglected for a long period of time, it will put up an A.T. (Absolute Terror) Field around itself. The user can coax it out by pressing the A button. While the Angel has the A.T. Field up, the user can't feed it or play the games, but can still check the clock, turn the sound on and off, and check needs with the C button.

Every hour, normally at XX:30, animations of various other characters from the Evangelion franchise will appear. Pressing any button will trigger the animation to end, with some showing an additional screen before closing. The animations appear daily, unless the Angel is in the cocoon stage. Raising certain characters causes additional animations to appear at 3 PM.

In both instances, pressing A and C together will trigger a new fetus to appear. 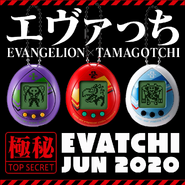 Promo image of the first wave of shells 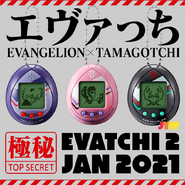 Promo image of the second wave of shells 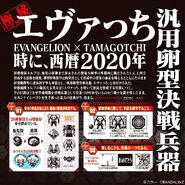 Chart showing possible angels from less than 4 hours of incubation

Chart showing possible angels with over 8 hours of incubation