The Extellatchi (えくすてらっち) is a licensed Tamagotchi Nano model based on the Fate/EXTELLA games from the Fate/EXTRA series, a subseries of the TYPE-MOON series Fate. The Extellatchi is bundled exclusively with the "Fate/EXTELLA Celebration BOX" (commemorating the 10th anniversary of Fate/EXTRA's release), and will not be available for individual sale.

The Extellatchi uses the same ball chain design previously used on the Evatchi. It comes in one shell design, and was produced in China. The packaging lacks a hook hole, due to not being distributed individually.

Fate is a series of video games produced by TYPE-MOON. The series focuses on the Holy Grail Wars, a ritual performed by mages to create and use the Holy Grail and have their wish granted. The main combatants of the Wars are Servants, the eternal spirits of famous individuals from folklore and history. Servants come in many different classes, each determining the roles a Servant can perform in battle. On the Extellatchi, the user is tasked with training a Servant for combat by caring for their needs and having them participate in an arena. The roster of Servants on the Extellatchi is primarily based on the roster of playable Servants found in the video game Fate/EXTELLA Link.

The initial stage is 24 hours long, while the evolved Servant will continue until it departs either due to neglect or reaches the end of its life span. Which Servant it evolves into depends on which class it was began as, and the quality of care it is given. There are also special servants that can be raised if certain requirements are fulfilled.

There are no on-screen icons, and therefore all information is conveyed through the screen and buttons. The Servant is cared for by filling its meters; they have Hungry and Happy meters, each consisting of four units, which are both empty when they're born. The Hungry meter decreases by one unit per hour, and the Happy meter decreases by one every 50 minutes. If either becomes empty, the Servant will call for attention to fill them.

The user can press the C button for an animation to see what it needs. A dizzy spiral signifies an empty Hungry meter, while a sulking mark signifies an empty Happy meter. If both the Hungry and Happy meters are not empty, but the Happy meter is not full, the Servant will perform a happy animation. If the Happy meter is full and the Hungry meter is not empty, the Servant will perform a unique Close Up; it will show a panning full body graphic of the character before showing a close-up of their face.

Pressing the A button opens the main menu, with the options to feed or enter the arena. The meal option (yakisoba pan) fills one Hungry unit, and will refuse to eat anymore once the meter is full. The snack (roll cake) fills one Happy unit, and can be fed even when the Happy meter is full. The A button is also used to open the lights on and off menu when the Servant has fallen asleep. Unevolved Servants sleep at 8 PM, while evolved forms sleep at 10 PM. All characters wake at 7 AM, and will turn the lights on themselves when they wake up.

The Extellatchi features one game, known as the Arena. An animation will play of a monster, and then the user is prompted to press either the A or B button, once or twice. The game goes for five rounds. The user must successfully respond at least once to win the game, and five times for a perfect game. Winning in the Arena increase the Servant's Happy level; winning the game fills Happy by one unit, while a perfect game fills Happy by two.

Throughout the servant's life, the program will become infected by "bugs", represented by the screen around the servant turning dark. Pressing the A button make the servant use "Code Cast" to clear it away. If the user fails to respond in time, the bugs will become more dense on the screen. The user cannot feed or play with the Servant until the bugs are removed.

If calls to feed, play, or clean bugs are ignored for too long, the Servant will sulk, represented by it making an upset expression with three lines at the top of the screen. Pressing the A button twice will cheer the Servant up. The user cannot feed or play with the Servant until it has been cheered up.

If the user either neglects the servant or lets it live for a long time, it will eventually return to the Moon Cell, shown by it disappearing with a glittering effect. Pressing the A and C buttons together will summon a new servant. Your Servant can live up to a month or so before departure if they don't depart due to neglect. 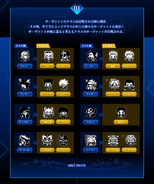 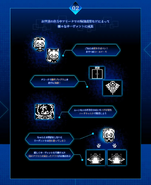 Some of the features in the virtual pet

Some other character forms

Retrieved from "https://tamagotchi.fandom.com/wiki/Extellatchi?oldid=102944"
Community content is available under CC-BY-SA unless otherwise noted.