Not to be confused with Fairy, a character from Tamagotchi Mothra.

Female:
Fairytchi (フェアリっち Fearitchi) is a female Tamagotchi character who debuted on the Tamagotchi On. She is the younger twin sister of Majoritchi.

Fairytchi has pale pink skin and pink cheeks. Most of her head is light pink, except for her face, which is pale pink, and a dark pink triangular stripe that goes down the middle of her head. She has dark oval-shaped eyes with starry reflections and three eyelashes each. She has two white butterfly wings with light pink swirls on each side of her head, and dark pink antenna sticking out of the top of her head. She wears a light blue and yellow frilly dress with a frilly white collar.

Fairytchi has a kind personality that is contrasted by that of her twin sister Majoritchi.

Fairytchi appears as an exclusive character on the Fairy version of the On. She can be found at Fairy Land where she can be befriended and married. She also gifts the user's tamagotchi the Balloon accessory if they visit the Fair between 7 AM and 7:59 AM. Her favorite items are: 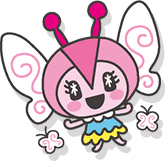 Artwork of Fairytchi for Tamagotchi Meets/On
Add a photo to this gallery
Retrieved from "https://tamagotchi.fandom.com/wiki/Fairytchi?oldid=101060"
Community content is available under CC-BY-SA unless otherwise noted.