Tamagotchi!
Fuwamokotchi (ふわもこっち) is a rare phoenix Tamagotchi that appears in episode 131 of the Tamagotchi! anime, in which it later evolves into Natsutsugetchi. It is voiced by Kana Uetake.

Fuwamokotchi's baby form is large, round, and cream-colored, and is somewhat shaped like a fluffy drop of cream. It has a yellow beak, pink cheeks, reddish-brown eyes, and through spiked tufts of hair on its forehead. It also has thin brown legs, pink heart-shaped wings, and two pink feathers on its head. It wears a bib that Mamametchi gave to it, which used to belong to Chamametchi when she was younger.

Fuwamokotchi's evolved form is a darker shade of cream with orange cheeks, stronger wings that are now dark cream with pink tips on the feathers, and a more bird-like beak. It has a puffy cloud formation on top of its head, with a white strand going over its forehead and a pink strand pointing from the upper back. It still has thin brown legs, reddish brown eyes, and the white bib from Mamametchi. It now has blue boots and a tail made of fire.

Fuwamokotchi fell from the sky into the backyard of the Mame Family's house. It quickly bonds with Mametchi, who strives to take care of it with a kind heart. It loves drinking milk and is often trying to fly, even though it can barely do so. Everyone in Tamagotchi Town finds it adorable, and Mametchi's friends want to help take care of it. When it cries, it is so loud that it almost shatters glass.

Mametchi eventually takes Fuwamokotchi into the woods, where it wants to practice flying, but to no avail. Soon, a storm breaks out, and Fuwamokotchi is terrified of rain. Mametchi shelters it in a cave and stands outside because he cannot fit inside, since Fuwamokotchi takes up so much space. Mametchi gets struck by lightning and can't move but he still wants to protect it. Fuwamokotchi, distraught, overcomes its fear of the rain to go find help. After a bridge is struck by lightning and burns down, Fuwamokotchi has no choice but to try and fly over the gorge. It starts to fall, but evolves into Natsutsugetchi and is able to go find Papamametchi and Mametchi's friends. Later, a Tama Heart appears because of its bond with Mametchi.

Fuwamokotchi's name comes from two Japanese onomatopoeia words for "fluffy". Fuwafuwa (ふわふわ) means fluffy or light and springy, like whipped cream or a marshmallow. Mokomoko (もこもこ) means fluffy like a cloud or a cotton ball. Fuwamoko (ふわもこ) is often used to describe soft and fluffy clothing. 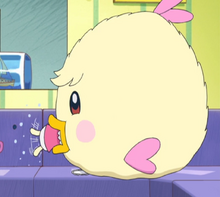 Add a photo to this gallery
Retrieved from "https://tamagotchi.fandom.com/wiki/Fuwamokotchi?oldid=86673"
Community content is available under CC-BY-SA unless otherwise noted.