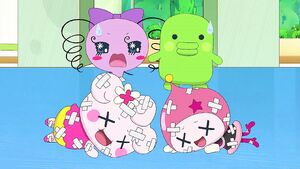 Himespetchi and Neenetchi have always been good friends, but they had a fight over a trivial matter. In such a quarrel, they bumped into each other and their minds have been swapped. They pretend to be each other so that they do not seem suspicious to everyone.

Retrieved from "https://tamagotchi.fandom.com/wiki/Gigakyun!_Neenekyun!_Big_Gottsun!%3F?oldid=93762"
Community content is available under CC-BY-SA unless otherwise noted.