Ginjirotchi (ぎんじろっち Ginjirotchi) is a Tamagotchi that debuted on the original Tamagotchi. He then featured on the Tamagotchi Mini and the Version 2, but afterwards, he did not feature as a raiseable character again until the Pac-Man Tamagotchi.

He was present in the 15th Anniversary Character Poll as a male adult.

Ginjirotchi has a blue, bean-shaped body, a large mouth with an overbite, stubby arms and legs, and a dark blue marking on his head and back. In the US artwork, his marking was black and more angular. In the Tamagotchi L.i.f.e. app, he can also be pink with a red marking, or yellow with an orange marking.

Ginjirotchi is independent and understanding. He is happy-go-lucky, cheerful, agreeable, and caring. He is also sensitive, and may often be seen shedding a tear. The official Japanese site describes him as having a "very bubbly personality". Ginjirotchi has the ability to start hovering for a few seconds by spinning around, jumping, making his stomach face the ground, and continuing to spin.

Ginjirotchi is obtained from Tamatchi with above-average care, with the discipline level around 75%.

Ginjirotchi is one of the characters that may appear on the Tamagotchi Monitor.

Ginjirotchi appears as a special adult on the English version. He evolves from Mametchi with perfect care.

After concert performances, Ginjirotchi can sometimes be spotted within the crowd.

With the 1996 Ver. downloads, Ginjirotchi may appear when visiting the 1996 Tamagotchi Town.

On the 20th Anniversary and Gift versions, Ginjirotchi, along with Nyorotchi and Tarakotchi, appears at Professor Banzo's lab when the Time Machine is used.

In Ginjirotchi's episode, he wanders in a field and does a happy dance, where he jumps in the air and twirls around. Other Tamagotchis see him and find his dance entertaining, eventually drawing a huge crowd. But then Ginjirotchi starts getting too dizzy to keep performing the dance properly, so the rest of the Tamagotchis depart.

In the ninth episode, which focuses on the characters of the Tamagotchi Angel, he dies in the hospital and his spirit leaves his body in the form of Obaketchi. He is escorted to the Tenshitchi Capital, where he eventually evolves into Ginjirotchi Angel. He finds some sweets and is about to eat them, but discovers they were bait left by Deviltchi. Chestnut Angel fends Deviltchi off, and the Tamagotchi Angels invite Ginjirotchi Angel to have dessert with them.

Ginjirotchi is one of the many Tamagotchi characters sent to Earth to collect a souvenir. He is partnered with Takotchi, and they bring back a red Cadillac. Ginjirotchi also does an impersonation of Elvis Presley.

Found in the Manga! Tamagotch

In Found in the manga! Tamagotch, Ginjirotchi is emotionally fragile and cries over almost anything, even if it isn't sad. The Boy first met Ginjirotchi in a library and saw him crying over a book. The Boy thought it must be an emotional story, but it was revealed that Ginjirotchi was looking at a map book.

"Ginjiro" (ぎんじろ) is a Japanese name that names "good silver". 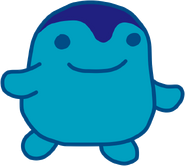 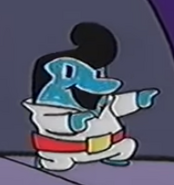 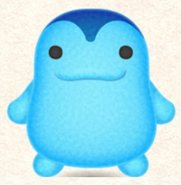 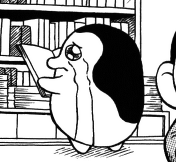 Ginjirotchi crying over a book in Found in the manga! Tamagotch 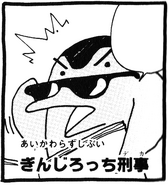 As a detective in Marugoto Manga de Tamagotch 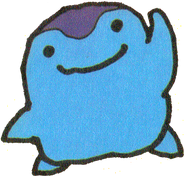 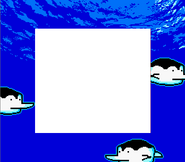 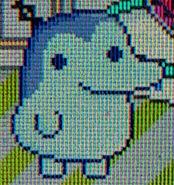