The Gotchi King (ごっち大王 Gotchi Daiou, meaning "Gotchi the Great") is an egg-like Tamagotchi that rules Tamagotchi Planet. He lives in his castle, and he is married to the Gotchi Queen and is the father of Princess Tamako and Princess Tamakoko.

The Gotchi King resembles a large, golden egg wearing a royal crown and a red cape with white, furry trim. His crown appears to be made of gold with red fabric in the middle, and red spots or gems along the gold. There is also a pink orb on top of the crown.

He has no visible face, but is capable of speech. However, in the Corner Shop games, he does not speak, instead using emoticons to express his emotions.

When he originally debuted, his cape was green and his crown had a very simple design.

Based on the paintings in Gotchi King's castle along time ago, a Gotchi King fell down from the sky. The Tamagotchi back then believed that he was mighty, wise and destined to rule the planet. Then the years had passed and Gotchi King still rules Tamagotchi Planet, passing his throne to the next generation of the Gotchi King.

During the half-ending in Tamagotchi Connection: Corner Shop 3, Uranaitchi shows some of the Mayor's past, when he battled the Gotchi King in a game of Rock Paper Scissors for the throne. The Gotchi King won and retained the crown.

Keitai Kaitsuu Tamagotchi Plus and Akai

The Gotchi King made his virtual pet debut as an NPC on the Keitai Kaitsuu Tamagotchi Plus and Akai. The user can donate Gotchi Points to him, and if they donate 1000 Gotchi, the King appears and leaves a Lucky Unchi-Kun servant as a reward. Unchi-Kun appears and cleans up any poop left on the screen if the user does not immediately attend to it.

On the Ura Jinsei Enjoy Tamagotchi Plus, his role is played by Big Boss Gotchi.

On the Tamagotchi Plus Color, the user can visit the Gotchi King's Castle if all seven of the Happy Items are acquired. There, they can play a game involving catching falling money and earn up to 500 points per visit.

A very early depiction appears of the King in the 1997 direct-to-video animation Tamagotchi Video Adventures. He is strikingly similar to his current form, except his cape is green and has visible eyes. He keeps in touch with Cosmotchi through a computer on how the visit to Earth is going. When Maskutchi's stick is put into the museum, the Gotchi King smiles and bows to him.

In Let's Go! Tamagotchi, it was revealed that if he laughs too hard, he will crack--which is based on the verbal expression of "cracking up", and the fact he is an egg. He does start to crack by the end of an episode, but it is not known what happens afterwards. This canon is present in Tamagotchi! too, but he never starts to crack because he usually stifles his laughter. He is voiced by Dan Green in the English dub of the mini-series.

In Tamagotchi: The Movie, Gotchi King does not have a major or speaking role, but his birthday is frequently discussed and used throughout the plot as the Tamagotchis are making preparations for it. In the English dub, he is called the Great Gotchi instead of Gotchi King, similarly to Tamagotchi Video Adventures and matching his original Japanese name.

In Tamagotchi!, Gotchi King is a egg-like Tamagotchi that rules Tamagotchi Planet. He loves cute things like Telelin, Pashalin and even Lovelitchi and Melodytchi. He loves telling jokes, but they're not really funny; somehow the only Tamagotchis who like his jokes are Melodytchi, Kizunatchi, and Telelin. Everyone expects him to be wise, but when he speaks he always tell his jokes and puns, such as "eggcellent" ("egg" and "excellent"). He is cheerful but somewhat childish and irresponsible, and sometimes his daughter Princess Tamako has to scold him or tell him what to do. Because he has no limbs, he can't move a lot on his own, and usually his Royal Servants will carry him around on his throne.

In episode 27, the Kuchipatchi of Truth takes Mametchi and his friends back in time to the era of the first Gotchi King. This Gotchi King is identical in personality to the modern-day version, except he has a green cape and crown. This green color scheme could be a reference to the vintage portrayal of the character.

In episode 136, Gotchi King is shown to become sick with a disease that can only be caught by him and is only curable with a crystal crown. The disease causes him to become boiling hot, referencing boiling eggs. Princess Tamako sets off with Mametchi and his friends to find it and save the Gotchi King. They end up meeting one of Gotchi King's old friends, Adventchi.

In episode 18 of GO-GO Tamagotchi!, he forms a friendship with Orenetchi after they both ran away from home.

After Tamagotchi Video Adventures introduced the concept of a ruler of the Tamagotchi Planet, the PlayStation game introduced the Gotchi King. The only major difference between his vintage depiction and his modern one are that his cape is green instead of red, much like the Great Gotchi from the aforementioned video.

Gotchi King on his throne 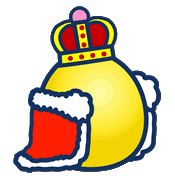 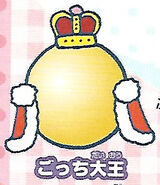 Gotchi King in a manga panel from GOGO♪ Tamagotchi!

The Gotchi King with his wife and daughter in an episode of Tamagotchi!

Gotchi King in one of Tamagotchi!'s opening themes

Add a photo to this gallery
Retrieved from "https://tamagotchi.fandom.com/wiki/Gotchi_King?oldid=98785"
Community content is available under CC-BY-SA unless otherwise noted.