Male:
Gourmetchi (ぐるめっち Gurumetchi) is a male teen-stage Tamagotchi character that appeared on the Tamagotchi Connection Version 4 and Chou Jinsei Enjoi Tamagotchi Plus.

Gourmetchi has a cube shaped body which is pale cream with a blue stripe going across the middle. He has large eyes, small white arms and brown feet, and a strand of hair on his head which splits into two curls.

Gourmetchi has one of the most refined palates in Tamagotchi Town. With his keen eye for gourmet food, he knows all the best restaurants in town.

Gourmetchi is a male Meme group teen, evolving from Memebotchi with above average care or better. Depending on his highest skill points, he may evolve into either Tosakatchi (intelligence), Togetchi (fashion), or ShimaShimatchi (kindness).

Hinotamatchi is a male Meme teen that can evolve from Harutchi, Puchitchi or Mizutamatchi with good care. If he finishes the teen stage with a skill point total of 80 or higher and receives good care he may evolve into either Tosakatchi (intelligence), Togetchi (fashion), or Shimashimatchi (kindness).

Gourmetchi's name comes from the word "gourmet", which refers to his love of gourmet food. 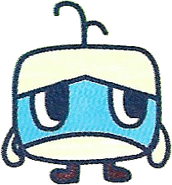 Add a photo to this gallery
Retrieved from "https://tamagotchi.fandom.com/wiki/Gourmetchi?oldid=100568"
Community content is available under CC-BY-SA unless otherwise noted.