Male:
Gozarutchi (ござるっち Gozarutchi) is male adult Tamagotchi that first debuted on the Tamagotchi Connection and has since been a well-known character in the franchise. He is generally obtained from severely neglecting good or average care teens.

De gozaru (～でござる) is an archaic Japanese phrase spoken at the end of sentences, with a meaning equivalent to desu. It is associated with samurai, ninja, and the time period surrounding them, that being feudal Japan.

Gozarutchi resembles a ninja. He wears a navy blue suit with two white stripes on the front in a "Y" shape. He is usually shown carrying a shuriken, also known as a ninja star. He has a small point on top of his head. His mouth is almost always nonvisible, for example, when he is speaking in the anime his mouth doesn't open. However, some of his sprite artwork shows his open mouth when he's eating.

Gozarutchi is very kind to others but can be quite hard on himself. His specialty is throwing ninja stars, and he hopes to someday be a ninja. He possesses many ninja abilities. Besides wanting to become a ninja, he is a bit lowbrow. According to his sister Kunoitchi, he actually has low blood pressure and is not a morning person. He lives in Gozaru Village. He adds "de gozaru" to the ends of his sentences.

He has a fond crush on Masktchi, while Violetchi has a crush on him. In the anime series, Kikitchi admires him and calls him master. He also has a habit of falling asleep when he's not supposed to, for example, right before class starts though this characterization is dropped in the Tamagotchi! anime series.

His profile on the Tamagotchi Pix website states: "Gozarutchi trains everyday to become a true Japanese ninja. He is kind to those around him though, he's strict with himself. He also likes to follow trends."

Gozarutchi is obtained on even generations with severe neglect. His special items earned through connecting are the Darts and Cape. In the Cape animation, Gozarutchi will briefly disguise itself as Oyajitchi.

Gozarutchi has a 1/3 chance of being obtained on even generations with severe neglect.

Gozarutchi is obtained on odd generations with severe neglect.

Gozarutchi is a male universal adult who evolves from any teen character with severe neglect. He sleeps from 10 PM to 10 AM.

Any male adult that has had their Happy meter empty completely three times will evolve into Gozarutchi. This evolution can be reversed through feeding the Steamed Bun or using the Whistle item. Upon marriage, Gozarutchi evolves into Kashiratchi. Upon evolving into Kashiratchi, his happiness neglect is irreversible. Gozarutchi can be considered a special evolution in this version.

Gozarutchi is obtained on odd generations with severe neglect and very high stress. He sleeps from 9.15pm to 8.00am.

Gozarutchi is obtained on odd generations with 4+ care mistakes.

Gozarutchi is obtained from any male teen with four or more care mistakes in either category and/or low training.

Gozarutchi is a male adult that appears on every version. During the first generation, he evolves from any male teen that either has 5-6 care mistakes, or has had My Town's theme changed to Ninja. This is the second instance where he is not at the bottom of the growth chart. If a male teen recieves 7 or more care mistakes it will become Shimagurutchi (Spacey/Melody, Anniversary/Gift, Sanrio versions) or Spaceytchi (Dream version).

As a potential marriage partner, Gozarutchi can be encountered at Gozaru Village. On the family portrait, Kashiratchi and Okugatatchi are shown as his parents.

Gozarutchi is a male adult that appears on every version. He evolves from any male teen in the first generation that either has 7 or more care mistakes. As an NPC he can be found at Tama Sport Plaza and in the Sanrio version he is at Food Town instead. He is absent in the Sweets version.

His favorite items are:

His favorite foods are:

Gozarutchi is obtainable from a male born from a blue egg with 6+ care mistakes.

Kunoitchi is Gozarutchi's sister. Everything about her is a mystery, but it's known that she is trying to be a ninja-lady, otherwise known as a kunoichi. It has been rumored that she always wears fashionable clothes underneath her ninja costume.

Okugatatchi is Gozarutchi's mother. She used to be a pop-star, but became a ninja to hide it. Kashiratchi is oblivious to this.

Kashiratchi is Gozarutchi's father. He is a teacher at the Ninja Training Center at Gozaru Village. He is also a great fan of popstars, like Lovelin. Hidden underneath his costume is a picture of his favorite star. He keeps it a secret but his whole family knows about it.

Gamanosuke is Gozarutchi's training partner and tama pet. Despite being large, he has a gentle disposition. He has a strong tongue which he uses to grab and hold things.

Gozarutchi is seen as a student at Tamagotchi School. In the second half of the movie, he appears with the rest of Mametchi's classmates at Mamemame Laboratory to watch over Mametchi and friend's mission in space.

Gozarutchi is one of the students in Grippatchi's class at Tamagotchi School. He is depicted as being tired most of the time, and he sleeps a lot. In "The Secret of Tamagotchi Town", Gozarutchi dreams about sleeping.

In the beginning of Tamagotchi: Happiest Story in the Universe!, Gozarutchi goes on a magical storybook adventure with other classmates.

Gozarutchi appears somewhat frequently in the first few seasons of Tamagotchi!. He is a student at Tamagotchi School. In "Kikitchi's Ninja Training", he gives Mametchi, Kuchipatchi, and Kikitchi ninja lessons. Kikitchi was skeptical at first, but later he became impressed with Gozarutchi and started calling him "master". He asks Gozarutchi to train him how to be a ninja, but Gozarutchi is overwhelmed by his enthusiasm and hides from him instead. In "Let's Train to Be Ninjas! De Gozaru", he also gives this kind of training to Lovelitchi and Melodytchi.

In "A Love Panic Situation" Violetchi develops a crush on him and spends the episode trying to win his heart with Lovelitchi, Memetchi, and Makiko's help. She ends up becoming his rival and attacks him after her wizard flower changes color to purple, meaning "a destined battle".

Gozarutchi appears as a minor character. He is a student at DoriTama School, and he is part of the school's soccer team. In "Fierce Fight! World Tama Cup", he and the other soccer players compete against Motetchi's team. 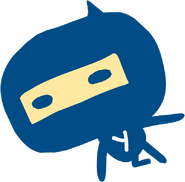 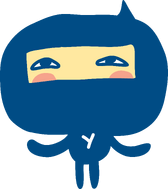 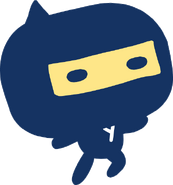 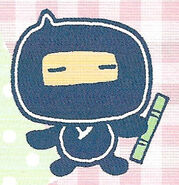 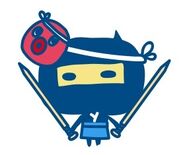 Hiding in a hole 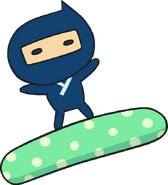 A sprite of Gozarutchi eating,which shows his open mouth and teeth

Gozarutchi as he appears in the Connections.