No Way! Mametchi Gets a Toothache

It seems Gypsytchi on Tama Street has a reputation for being a good fortune teller. Memetchi and Makiko, who love fortune-telling, decide to invite Mametchi and the others to meet them. Can Gypsytchi really tell fortunes?

At the cafeteria at Tamagotchi School, Memetchi asks everyone at the table if they heard of Gypsytchi. Makiko responds that Gypsytchi is known for their accurate fortune telling and Memetchi tells her that she wants to ask Gypsytchi about if she would meet her "Prince Charming". Makiko laughs at her and then says she would've asked her if someone was going to buy her the cute hair accessory she had seen the other day. Memetchi replies that her wish is boring and they begin to fight with each other. Mametchi tries to calm them down, telling them not to fight over "silly fortune-telling", but this upsets the girls more, who tell him that they love fortune telling. Memetchi then asks Mametchi and Kuchipatchi about having their fortunes told, but they respond that they haven't thought about it. Mametchi asks Kuromametchi, who sat at a nearby table, about fortune telling and he replies that fortune telling is for little kids and that he believes only in himself. Nearby, the Eco Usatchi twins admire Kuromametchi behind a bush.

Back at the table, the girls decide to see Gypstchi, but Makiko notes that she is hard to find as she comes and goes as she pleases. Uwasatchi then approaches the table to tell a rumor that Tamastetchi is the only way to find Gypsytchi. Later on, the four go up to Tamastetchi and ask her where they can find Gypsytchi. She takes out her character book, picks a card out, and scans it into her slot to call her. Gypsytchi appears on the screen and Tamastetchi states that the group wants to see her before handing the phone to them. Gypsytchi proceeds to lead them on a wild chase through Tama Street, telling them to follow various objects and people.

They eventually make it to an alleyway which opens up to a mysterious grassy field with a tent at the end. Upon entering the tent, they see Gypsytchi herself who asks if they would like to have their fortunes read. The girls accept her offer and Memetchi starts by asking if she'll ever meet a charming prince. Complying, Gypsytchi focuses on her crystal ball and then says that maybe Memetchi will meet a charming prince...or maybe she won't. Baffled, Memetchi asks which answer she meant, but Makiko pushes her away to ask if someone will get her the cute hair accessory she wanted. Focusing on the crystal ball again, Gypsytchi responds that maybe Makiko will get the hair accessory...or maybe she won't. Much to the girl's disappointment, they question the truthfulness of Gypsytchi's fortunes, saying that they're too uncertain to be useful. Memetchi then has the boys ask for their fortune and Mametchi complies, asking if Gotchiman will succeed in today's episode. Much like the other two fortunes, Gypsytchi responds with an uncertain answer to which Mametchi considers a fake reading. Kuchipatchi then asks what his favorite dinner is and Makiko gets excited as this question must have a clear answer. However, Gypsytchi predicts that his favorite dinner tonight will be pizza, but says it could be curry instead. Kuchipatchi is pleased with the answer, but everyone else is disappointed.

The next day at school, Makiko skips down the hall with a hot dog accessory in her hair and tells Memetchi that Gypsytchi's fortune came true. Yesterday, Majorite had seemingly bought the cute accessory for Makiko, but it turns out she mistakenly bought the hot dog one next to it. She was disappointed at first, but came to love the hot dog accessory after trying it on at her mother's request. Mametchi then comes up to the girls to tell them that his fortune about Gotchiman came true. Yesterday, Mametchi was watching the Gotchiman show where Black Hat seemingly defeats Gotchiman. However, it turns out Gotchiman had switched bodies with Black Hat due to an experiment gone wrong meaning Gypsytchi's prediction came true. Kuchipatchi then comes in to tell everyone of his dinner fortune coming true. In his flashback, Mamapatchi made pizza for dinner and then poured curry on top as a special treat just for that night.

However, Memetchi still wonders if her fortune about prince charming was true as she hasn't seen them yet. She resigns that her fortune was too exaggerated and must be false, but then spots Prince Tamahiko passing by the window who says hello to her. Memetchi decides that must be her fortune technically coming true and the rest of the gang are amazed at how accurate Gypsytchi's fortunes were. The Eco Usatchi triplets, excited from the gang's account of Gypsytchi, are later seen following a leaf to Gypsytchi's tent. Inside, the girls come up to her and ask if they were all destined to be with Kuromametchi. Gypsytchi focuses, but reveals that the three girls are fated to be with Kuchipatchi instead, shocking them.

Back at the cafeteria, the triplets watch Kuchipatchi behind a bush, unsure of what Gypsytchi had told them. One of them points out that he's green like them and they all immediately fall for him. Kuchipatchi looks back at them, wondering who they are. 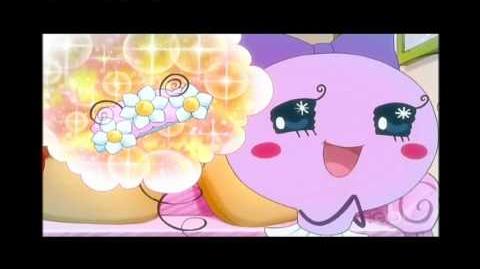 Gypsytchi ready to tell a fortune

Focusing on the crystal ball

Majorite excited about the hair accessory she got for Makiko

Following a leaf to Gypsytchi

"Are we fated to be with Kuromametchi?"

Shock at being fated to be with Kuchipatchi instead
Add a photo to this gallery
Retrieved from "https://tamagotchi.fandom.com/wiki/Gypsytchi%27s_Fortune_Telling?oldid=104959"
Community content is available under CC-BY-SA unless otherwise noted.